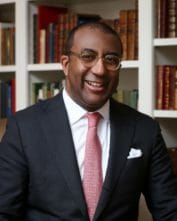 All human beings are a product of collaboration. In basic terms, two humans join together – sometimes with the assistance of modern medicine – to make a child. In some families, collaboration ends at the moment a child is created. In the lives of other individuals, collaborations continue throughout a lifetime.

Eric Motley’s (Samford University, 1995) entire life has been the embodiment of the wonders of collaboration. He grew up in Madison Park, in Montgomery, Alabama – in a community that was established in the late 1800s by freed slaves. Born to a single mother and raised by her adopted parents, Eric was supported and invested in by the members of his community. In his 2017 book, Madison Park: A Place of Hope (Harper Collins Publishers, 2017), he shared the story of how he became the DUK, the “designated university kid.”

When he was falling behind in reading ability as a first-grader, “Aunt Shine”, a retired teacher and local citizen of the community, announced fromthe church’s pulpit that young Eric needed access to all of the reading material that was available in Madison Park. Members of the community brought old newspapers, magazines, books, and even one encyclopedia so that he could further develop his reading skills. When he was in junior high, a teacher of his took an interest in his development and drove him nearly every Saturday during the school year to seventh and eighth grade speech competitions to enhance and improve his public speaking skills. As Eric sought to learn more, his adoptive grandfather who raised him, drove him to and from Montgomery on a regular basis so that he could have access to the wealth of knowledge contained in the city’s public library. And when it was time for Eric to head off to college in 1992, his junior year English teacher lobbied the then president of Samford University, Dr. Thomas Corts (Samford University, 2001), for Eric’s admittance with the provision of a full presidential scholarship. Eric said, “I accepted without hesitation.”

In reflecting upon the individuals who helped him succeed as a child and student before college, Eric wrote, “A backward glance over my personal odyssey to that point shows that I had stood on the shoulders of a great number of people. Theirs was a collective act of grace. Together they formed a gigantic accountability circle, helping me focus on higher things, such as the liberation that an education could afford and the guiding principles that would keep me true to my course.”

As a student at Samford University, Eric had further experiences with individuals who would help form and refine his intellectual pursuits. In addition to President Corts, who personally supported Eric’s junior-year study abroad experience, Dean Rod Davis (Samford University, 1956) introduced him to books, National Public Radio, and periodicals which expanded his appreciation for the written and spoken word. Professor Steve Epley (Samford University, 1997) facilitated an increased awareness of different authors for whom Eric would be influenced by through the years.

In writing about his teachers in Madison Park, Eric acknowledged, “Someone once said that good teachers are with us for a lifetime; certainly the lessons they teach us are, and in some instances the teachers are as well.” He remains close to both Dean Davis and Dr. Epley.

Eric notes that one of the more significant collaborations of his collegiate career involved his acceptance into membership of Sigma Chi Fraternity. While several of his close friends who were already members encouraged Eric to go through rush, there was resistance to the acceptance of an African-American member by a number of the other brothers in the fraternity. However, ten senior members, well-respected brothers in the fraternity, joined Eric’s friends in making the case for his selection as a member. These senior members received angry calls from parents and some alumni, but they stood together and challenged the others who sought to ban Eric based on the color of his skin. Eric was eventually elected president of his pledge class. He said, “I’ve never regretted my decision to pledge. My fraternity brothers came to see me as more than a token of a minority group. We became true brothers.”

Upon finishing his undergraduate degree at Samford, Eric went onto earn a master’s degree and eventually a doctorate at the University of St. Andrews in Scotland. Later, he returned to the United States where additional collaborations helped him secure his first professional position. A long-time friend put him in touch with Temple Tutwiler who eventually connected Eric with Margaret Tutwiler, who served as a special counselor to President George W. Bush. She subsequently recommended him to the director of presidential personnel who called to schedule an interview. The night before the meeting about the job, Eric stayed with his friend from Samford, Brad Heifner, who even walked him to the Metro stop to make sure he got where he was going. By the end of the interview in 2001, he was offered the position of deputy associate director, Office of Presidential Personnel, in the White House.

As Eric moved to Washington, a friend drove the U-Haul containing a gift of a Queen Anne armchair from one of his mentors, and President Corts provided him with the suit that he would wear on the first day of work. As he walked through the gates of the White House, he carried the briefcase “lent’ to him by a former junior high teacher. Before the conclusion of President Bush’s administration, Eric was appointed to the position of special assistant to the president for presidential personnel, overseeing all boards and commissions appointments.

Throughout his early life, Eric Motley’s achievements were a collaborative effort, but as his career has progressed, he has championed collaborations, partnerships, and alliances to address societal issues. Subsequent to his tenure at the White House, he served as the executive director of the Aspen Institute-Rockefeller Foundation’s Commission to Reform the Federal Appointments Process. The work of this commission was an independent, nonpartisan effort to evaluate the Federal government’s vetting and clearance procedures.

As one who was keenly aware of the multiple efforts and individuals involved in working sometimes independently, sometimes collectively, to support and advance his leadership journey, Eric has long kept a journal including a list of those for whom he was thankful. His “gratitude list” includes those people who have been important in his life. He shares his prayer of appreciation in Madison Park.

“Dear God, thank you for these people and those whose names I have forgotten. I’m here because of them. Bless them each and every one.”

Eric Motley is an executive vice president at the Aspen Institute, where he is responsible for institutional advancement and governance. He earned his bachelor’s degree in political science and philosophy from Samford University. As a Rotary International Ambassadorial Scholar at the University of St. Andrews in Scotland, he earned a Master of Letters in international relations and a doctorate as the John Steven Watson Scholar.