Three members of Omicron Delta Kappa were interviewed this fall and asked about the consequences of the COVID-19 crisis on different aspects of American life. John Thelin (University of Kentucky, 2000) is a university research professor in the history of higher education and public policy at Kentucky. David Lyons (University of Richmond, 2017) is the chief operating officer at Lowe, Brockenbrough & Company, a firm that assists non-profit organizations and educational institutions with management of investments and endowments. Christine Chmura (University of Richmond, 2014) is the chief executive officer and chief economist at Chmura Economics and Analytics, a labor market and data analysis firm. Holly D. Gordon is a 2001 initiate of the University of Richmond Circle.

In addition to canceling in-person classes, higher education institutions had to make tough decisions when established features of college life, including commencement and NCAA championships, had to be suspended back in March. John Thelin thinks that took a great deal of courage. He said, “They were hard, but good, choices.” 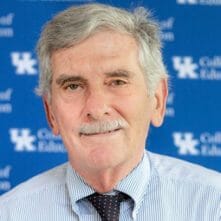 Summer provided a natural break for operations. For a lot of the American public, there was a sense the crisis would be over soon. There was a genuine desire for all involved – students, deans, parents, staff – to re-open campuses in a traditional way. “That’s a tribute to how highly-regarded colleges are. Americans are fond of colleges. We like them, we want our children to go there. We want to go to their libraries, their events, their athletics,” Thelin remarked.

Administrators made efforts to approximate genuine re-openings, but as more data and public health information became available, personnel had to acknowledge the many unknowns. “This is not the flu. It’s life-changing for students, institutions,” Thelin pointed out. He also indicated that he thought most leaders were decisive about the choices facing the schools.

In consideration of why there seemed to be an especially fervent public response to teachers and higher education, Thelin said, “Some of that anger is off-handed testimony of how important and excellent schools are to American life. To suddenly remove that from how one grows up and how families interact, it pulls the plugs out on our whole American way of life.”

When asked what it is like for higher education leaders being criticized for every choice, Thelin responded, “Each leader will do an estimate on which way the risks can go, with neither decision being wholly satisfactory.” He noted that the pressure placed upon institutional administrators from coaches, students, and politicians is a good example of these difficult choices and regional differences in interpretations of decisions. The NCAA Football Bowl Subdivision conferences located in the southeast made decisions to play this fall, while the Pac-12 and Big Ten suspended competition but eventually reversed earlier decisions not to play and resumed competition this fall. However, it is evident to Thelin and others that few are entirely pleased with how this football season has unfolded.

Thelin acknowledged that universities risk losing confidence in their tradition of students and families paying for the in-person collegiate experience. Consumers will question the value if the format for the experience is significantly changed. He is not persuaded that distance courses are necessarily inexpensive or of lesser quality. Thelin noted that some of the most expensive degree programs in the U.S. are online, such as the M.B.A. program at Duke University. He concluded that for the future, “Colleges will have to put more resources into public health and safety, regardless of format.”

“The connection between the markets and the-day-to-day is as big of an enigma as it’s ever been,” said David Lyons. “There is a greater disconnect today than what anyone remembers between what they call Main Street and Wall Street (i.e., the economy itself and the health of the market). Unemployment is at levels we’ve never seen. There is a greater economic malaise in segments of the market and in towns and cities. Yet, the market is reaching highs. That disconnect is hard to understand.”

According to Lyons, one of the factors influencing the modern market, which was already in play before the COVID-19 crisis, was that about six to eight stocks had consistently led the Standard & Poor’s 500 index. He noted that those stocks had done so well it has made it look like the entire market has done well. However, Lyons acknowledged that many companies had not been a part of the market turnaround since March. He indicated that the companies that are doing well are in technology, and they easily adapted to the COVID-19 environment for the things people needed while sequestered in their homes.

Lyons said, “They’ve led for a reason because they’re on the cutting edge of what consumers want.” He noted that in the late 1990s, the technology sector was screaming along with all of the stock market narrowly focused on it. When the market crashed then, it fell pretty hard on the back of technology stocks. Lyons noted that today’s question is if there will be the same sort of large collapse.

“The unprecedented level of the coronavirus relief bill from the federal government has propped up the economy and is keeping it from free falling. We shut down our entire economy for two months, and we’re not fully back today. Under any other circumstance, we would have fallen into deep recession or depression,” said Lyons.

Lyons noted that there are a lot of challenges facing financial professionals during this period. He said that criticism “goes with being a leader. You don’t get excited about the credit. You don’t take it personally the criticisms you get for what people perceive to be bad decisions. Some of the criticism is politically motivated and not scientifically sound. When any community – a college, country, world – faces a crisis, it’s the coming together that gets us through it. Behaving well, so we don’t get each other sick [for instance]. The sooner we get through this, the quicker the economy recovers.”

Christine Chmura has been studying the interrelationship between the economy, employment, and recessions for decades. However, the recent months have been a surprise, even to her. “This is a very different recession. No one expected it. The economy was fundamentally strong. The government had to take the best advice they had from medical professionals and scientists to shut down the economy, or the non-essential pieces of the economy, to reduce the number of deaths and to not overwhelm the hospitals,” she said about the first months of the COVID-19 virus response. According to Chmura, recessions accelerate trends that are already happening. These trends include remote work, online purchases, artificial intelligence or machine substitutes for labor, and bringing supply chains back to the U.S. She emphasized, “This is not the first time we’ve seen something like this. Every recession, you see more of the technology.”

Chmura’s observations about the acceleration of economic and market trends in periods of recession also extend to the higher education sector. About colleges and universities, she explained, “They’re having to prove the worth of the degrees they’re awarding. If a student is running up high debt, and their degree is in an area without a lot of demand, they’ll ask: do I really need a four-year degree? If I can’t be physically present and get the other benefits, then is it worth my while to incur this debt?”

Chmura and her colleagues have created a COVID-19 Economic Vulnerability Index, which may be found at www.chmuraecon.com. The index gauges the negative impact the COVID-19 crisis can have on jobs in a region based on the industries present and their expected job losses. South Florida, for example, had a much larger decline in the job market because it depends heavily on retail, tourism, and hospitality. These industries were hit hard by the pandemic. Other regions with a mix of professional business services fared better.

Chmura’s firm also studied the Bureau of Labor Statistics data to create the Remote Work Index (which also may be found at chmuraecon.com). This index compares the mix of remote-work employment in the region versus the average in the nation. The areas that have the greatest amount of remote work are the high tech sectors: San Jose, Boulder, Seattle, San Francisco, and those with high concentrations of office workers like Boston or Washington, D.C. Regions with low remote work are places with high tourism, like Myrtle Beach, or those dependent on manufacturing, like Elkhart, Indiana.

When employers were asked their planned timing for workers to return to the office or work site, 35% said the timing is unknown. “What surprised me was that only three percent said workers will be remote permanently. Given what we’re hearing in the media, it felt like more would be saying they’d be permanent remote at a much higher rate,” noted Chmura. Chmura also commented on how the opportunities to work remotely vary based on education levels. Her analysis found that about 35% of all jobs in the market are estimated to require a two-year college degree or higher for entry. In contrast, for remote-work jobs, 87% of these positions typically require a two-year degree or higher. According to Chmura, once a vaccine is widely available, it will reduce the number of people working from home. She also indicated that employers might currently be hesitant to hire remote workers knowing there will be expectations for employees to return to in-person work environments in the future.