Omicron Delta Kappa was founded on Dec. 3, 1914 on the campus of Washington and Lee University in Lexington, Va. The Society was founded by a group of 15 students, faculty, and administrators who believed that leadership at the collegiate level should be recognized and encouraged across all phases of campus life. The motives which guided the founders sprang from the desire to bring together one body for the general good of the institution, leaders from all parts of the college or university community.

The success of the O∆K Idea, an essential part of which is its inter-generational nature and a determination to maintain a consistent and high standard of leadership recognition, led to the establishment of chapters, which we call circles, at other colleges. Initially, the founders had no intention of extending the Society to other college campuses. However, requests for charters began to come in from local groups at Johns Hopkins University, the University of Pittsburgh, and Davidson College. It was clear that the O∆K Idea was one that could benefit other institutions of higher learning. By 1917—just three years after founding the Alpha Circle—Omicron Delta Kappa became a national leadership honor society.

During World War I, O∆K remained intact in large part because of its faculty members—many of whom were too old to serve in the Army or Navy. After the war when students returned to their campuses, O∆K continued to grow and develop, chartering new circles at colleges and universities across the country.

Over time, the Society has become a more inclusive organization. Although the Society has not collected demographic information in the past, there are records of African American male members being initiated in the early 1970s. The first circle to be established at a Historically Black College or University (HBCU) was at Morris Brown College in 1976.

In 1974, the O∆K Biennial National Convention approved the initiation of women into the Society. Ten women, representing the New Jersey Institute of Technology and the University of South Florida – Tampa Circles, were initiated at the convention.

To learn more about the history of O∆K, we encourage you to read The Laurel Crowned Circle: Omicron Delta Kappa and 100 Years of Leadership. The book is for sale through our online store at National Headquarters for $10 (including shipping). Please contact us at 1-877-ODK-NHDQ (635-6437) or email odknhdq@odk.org. 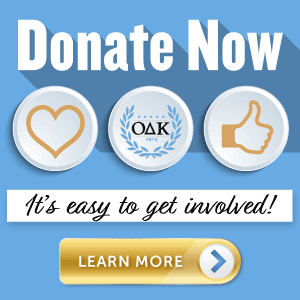