When the Society was first established in 1914, only men were admitted as members. However, at the 1970 and 1972 Biennial National Conventions, the members of the University of Alabama Circle began to formally advocate for the admittance of women into the Society. The Special Committee on the Possible Role of Women met in January 1973 and recommended changes to the National Constitution that would prohibit membership based on gender within the Society. The “Alabama Amendment” to the National Constitution was approved during the 1974 convention. On that date, the first women members were recognized by O∆K. Their names and circles of initiation are listed below: 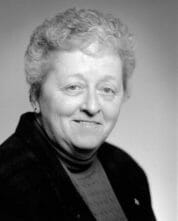