Cheryl Hogle, the first woman to serve as national president of Omicron Delta Kappa, died on Friday, April 19, 2019. Prior to her service as National President, she served as the SUNY Plattsburgh Circle Faculty Secretary, four terms as a Faculty Province Director, and two terms as O∆K’s National Vice President for Extension. After her retirement, she was named Associate Dean of Students Emerita at SUNY Plattsburgh. Cheryl’s deep and meaningful stewardship of O∆K truly left indelible marks on the Society’s history. To read more about her own reflections on leadership and Omicron Delta Kappa, click here. 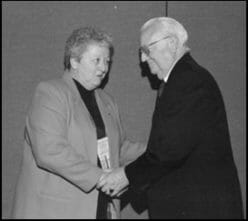 unanimous election as National President in 1998.

Cheryl Hogle’s imprint on O∆K transcends generations of members. Forty-four circles were chartered during her service as National Vice President for Extension. She championed a more efficient governance structure for Omicron Delta Kappa, and she touched generations of students in her roles in student affairs at SUNY Plattsburgh. She was National President from 1998 – 2002. During her tenure, she also served as a member of the O∆K Foundation Board of Trustees.

Mike Christakis, immediate past national president of Omicron Delta Kappa, shared the impact that Cheryl Hogle had on his life. He wrote, “Cheryl Hogle was an early mentor and personal inspiration in my work with O∆K. She saw potential in me as a student leader and connected me with opportunities to serve the Society at the local, regional, and national level. I credit the depth and breadth of my engagement with O∆K to Cheryl and will be forever indebted to her for her support and encouragement throughout my leadership journey.”

Michael Cashman, a former circle advisor and national volunteer, wrote in remembrance, “Cheryl Hogle was instrumental in my development as a person and as a leader. I had the good fortune to get to know her as a student leader and stayed connected with her for nearly 20 years. Her life served as a source of inspiration to me. She had a fierce leadership style that combined passion, dedication, highest level of moral character, and could add a dose of snark that unmatched anyone. Over the course of her life, Cheryl was a trailblazer over and over again. As a mentor, she embodied the spirit of challenge and support. I will cherish our conversations, as well as numerous notes and articles she would send me over the years. She leaves behind an indelible legacy as she touched numerous folks in similar ways.”

One of Cheryl’s most significant contributions to the Society was her push for circles to engage campus leaders from all corners of host institutions. It was important for her to have as many collegiate leaders as possible to be touched by Omicron Delta Kappa and for those leaders to help shape O∆K’s future. 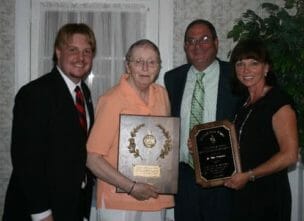 Details about services will be announced at a later date.

In recognition of Cheryl’s commitment to diverse and inclusive circles, memorial gifts through O∆K are directed to the Opportunity Fund (gift-of-membership). Gifts in memory of Cheryl may be made by clicking here.