John “Jack” D. Morgan served as the executive director of Omicron Delta Kappa from 1996-2009. Jack chaired the 1996 national convention held at Purdue University. A graduate of Ohio Wesleyan University, he received his master’s degree from the University of Georgia and his doctorate from Pennsylvania State University. Morgan served for 13 years as the vice president for student affairs at Maryville University, where he first became involved with O∆K and served as a faculty officer. He was a 1996 recipient of the Eldridge W. Roark, Jr. Meritorious Service Award and a 2012 recipient of the Cheryl M. Hogle Distinguished Service Award.

This award is given to honor a member of the Society who has rendered outstanding and sustained service to Omicron Delta Kappa throughout their life to promote the highest interests of Omicron Delta Kappa and, by virtue of this recognition, expresses tremendous gratitude to the recipient on behalf of the Omicron Delta Kappa Society.  Morgan was the first recipient of the award, presented in conjunction with the 2018 Biennial National Convention and Leadership Conference held in Nashville, Tennessee.

One award can be made annually. No person shall receive the award more than once. The award shall not necessarily be made annually. Current Omicron Delta Kappa employees and active national volunteers are not eligible.

The 2021 recipient of the award was William “Bill” E. Latture (Washington and Lee University, 1949).

To nominate an individual for this award, send a nomination to President/CEO Tara S. Singer at tara@odk.org. Deadline for nominations is 11:59 p.m. on March 1, 2023. The recipient is selected by the National Awards Committee. 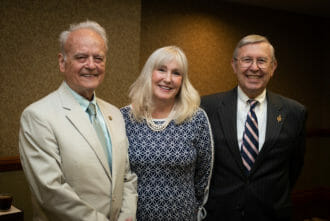