In honor of Black History Month, we would like to spotlight some of our outstanding OΔK members! Willie L. Banks Jr. is the vice chancellor for student affairs at the University of California, Irvine. He is the current chair of the Omicron Delta Kappa Board of Trustees.

Previously, Banks served as the vice president for student affairs at Indiana State University (ISU), where he also held an appointment as an assistant professor within the Bayh College of Education’s Department of Educational Leadership. Prior to joining ISU, Banks held a variety of student affairs positions at Cleveland State University. Earlier in his career, he was the director of the Tate Student Center and Campus Life and associate dean of students for intercultural affairs at the University of Georgia.

Banks is involved with the American College Personnel Association, Association of College Unions International, and NASPA: Student Affairs Administrators in Higher Education. He received his undergraduate degree from Mercer University in Macon, Georgia. Banks earned his master’s and doctoral degrees with majors in college student affairs administration from the University of Georgia. Yvette Nicole Brown is an actress, comedian, writer, and host. Brown grew up in Cleveland. After enrolling as a first-generation college student at the University of Akron, she earned her bachelor’s degree in journalism and mass media. Brown graduated from Akron in 1994.

Brown has performed in a wide range of hit television shows and films, including appearances on The Island, Dreamgirls, House, The Office, Two and a Half Men, and many more. In 2021, she received a nomination for a Primetime Emmy Award for her role in A Black Lady Sketch Show. Brown was inducted into the Warrensville Heights High School Hall of Fame in 2009. She also served on the SAG-AFTRA National Board from 2019-21. M. Jocelyn Elders is a retired professor of pediatrics who served as the 15th Surgeon General of the United States from 1993-94 under President Bill Clinton. She was the second woman, the second person of color, and the first African American to serve as surgeon general.

Elders received her bachelor’s degree in biology from Philander Smith College. She received both her medical degree and her master’s degree in biochemistry from the University of Arkansas. In 1978, Elders earned her certification as a pediatric endocrinologist.

In 1994, Elders returned to the University of Arkansas, where she worked as a professor of pediatric endocrinology until she retired in 2002. In 2016, the Jocelyn Elders Clinic was established in Kisinga, Uganda, serving students at Garama Humanist Secondary School.

In 1997, Elders published her memoir, From Sharecroppers’ Daughter to Surgeon General of the United States of America. She was inducted into the Arkansas Women’s Hall of Fame in 2016. 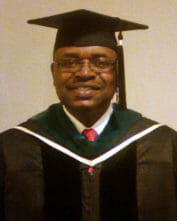 Andrew J. Hankins is a nuclear medicine specialist in Sterling Heights, Michigan. Now retired, Hankins served as the director of the radiology facility at the Henry Ford Health System’s Department of Radiology in Detroit. He also taught radiology at Wayne State University.

Hankins grew up in North Chicago, played high school basketball in Waukegan, and was named to the Illinois All-State team in 1960. He graduated 17th in his class of 520. Hankins signed with the University of Iowa in June 1960 to play for Coach Sharm Scheuerman. He lettered in his senior year.

In addition to being a member of O∆K, Hankins was also initiated into Phi Beta Kappa. In 1977, the University of Iowa selected him as the Young Alumni honoree in its Distinguished Alumni Award program.