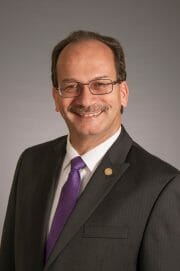 Once advised to forgo college, Havídan Rodríguez’s leadership journey to becoming president of the University at Albany (UAlbany) and an expert in the field of disaster research is unlike most. Rodríguez grew up moving back and forth between Puerto Rico and the Bronx. In New York City, his mother supported Rodríguez and his two siblings by driving a taxi. In Puerto Rico, his guidance counselor encouraged him to enter the field of automobile mechanics post-graduation.

Though he completed high school with a specialization in auto mechanics, Rodríguez’s ambitions to move out of poverty led him to join the Air Force as an emergency medical technician, his first step toward becoming a medical doctor. However, his time in the emergency room quickly taught him that medicine was not his calling. Rodríguez ended up obtaining a bachelor’s degree in psychology through a program offered to military personnel by the University of Maryland. He was the first in his immediate family to graduate from college. Rodríguez then completed a master’s degree in sociology from the University of Wisconsin-Milwaukee and a doctorate in sociology from the University of Wisconsin-Madison.

Early in his career, Rodríguez served as interim program director of the Department of Social Sciences at the University of Puerto Rico-Mayagüez. The opportunity to enter the field of disaster research occurred when some of his colleagues were submitting a grant proposal related to the impacts of hurricanes and other severe weather in the Caribbean. Rodríguez recalls, “They had received feedback from the National Science Foundation that their proposal would be strengthened if they had a social scientist to focus on the societal impacts of these events. Thus, they asked me to join their team.”

Rodríguez quickly found that disaster research related very well to the work on poverty, inequality, economic mobility, and migration that he was already doing as a sociologist. He explains, “Disasters disproportionately impact low-income individuals and poverty-stricken communities due to their high levels of social and economic vulnerability. Moreover, these communities may be located in hazard-prone areas subject to flooding and landslide, among others, thus increasing their vulnerability to these events.” Rodríguez continued his research on the social science of disasters, eventually establishing himself as an expert in the interdisciplinary field.

What differentiates a true disaster from a significant problem for a community? Rodríguez looks to scale and impact to find the answer. “Significant problems may have specific impacts on a limited number of individuals, while disasters impact the day-to-day functions at a community level,” he explains. Rodríguez continues, “Disasters generally have non-trivial impacts on infrastructure; may result in a significant number of injuries and casualties; and they create disruptions in basic utility services (e.g., water or electrical services), communication, and/or transportation systems.” On the socioeconomic level, he says “Disasters can result in severe social and economic consequences for the impacted communities” and require “systemic, well-organized, strategic responses.” Meanwhile, a significant problem does not require such extensive action and can be addressed at the individual or group level.

As part of Rodríguez’s disaster research, he leads and participates in field research projects. His on-site experience includes trips to Honduras, following Hurricane Mitch; India and Sri Lanka, following the Indian Ocean tsunami; and the Gulf Coast, following Hurricane Katrina. When asked about the greatest sociological impact he witnessed on an on-site project, he struggles to come up with just one answer.

“One aspect of the 2004 tsunami in India and Sri Lanka that has stayed with me were the haunting stories of fishermen out in their boats who had no idea that a tsunami had struck the shore where their wives, children, and elderly parents were killed while shopping in the local markets. Entire fishing communities were obliterated with a death toll in the thousands,” he recalls. He adds, “I will also never forget a devastating post- Hurricane Katrina scene in Mississippi, where the storm surge had decimated entire communities and the existing infrastructure as far as the eye could see.” While each disaster he witnessed was catastrophic in its own way, one central takeaway links the events together. “The poorest and most vulnerable communities are disproportionately impacted in terms of injuries and mortality, displacement, and socioeconomic consequences,” he explains. “These events do not create poverty, vulnerability, or devastation in healthcare systems, but they exacerbate these issues while highlighting the widespread disparities between the haves and have-nots in the U.S. and around the world. That is why it is so important to underscore the fact that disasters are human-induced and socially constructed events.”

Hurricane Katrina serves as an example of the idea that disasters can exacerbate pre-existing issues but do not necessarily create them. According to Rodríguez, the Gulf Coast region had a frail healthcare system and fragile infrastructure before Katrina struck. However, no event was large enough in scale and impact to decimate the infrastructure or cause extensive loss of life and injuries, until Katrina. The disaster exposed the region’s challenges with devastating consequences. Rodríguez notes that the role of the media in spreading misinformation also exacerbated Katrina’s impact. “Katrina was the first major hurricane to occur in the U.S. since the advent of 24-hour cable news,” he points out. “The media coverage tended to spread inaccurate information – sometimes focusing on what we call disaster myths – often originating with statements from government officials.” 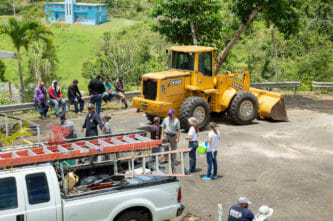 What does successful leadership look like in times of crisis? According to Rodríguez, it’s all about effective communication. “Communication must be clear, on point, consistent, and frequent to ensure adequate preparedness and response to a crisis situation,” he says. “Being honest, open, and transparent are critical elements of crisis communication, along with providing the resources, and assistance that communities need following a disaster,” he adds. However, the most successful leaders in a crisis stricken community are not merely day-of responders. Rodríguez explains, “To be an effective crisis communicator, you must have already established good lines of communication, engendered trust, and be known as a trustworthy figure or leader within your community.”

Rodríguez carries these leadership lessons over to his role of leading as president of UAlbany. “I believe my research and scholarship has helped me develop an ability to anticipate issues and challenges that may emerge. We need to be proactive rather than reactive – mitigation and preparedness are key to effective response, and minimizing risk is critical to the success of any institution,” he says. Accordingly, one of Rodríguez’s first actions as president of UAlbany was to form an administrative unit dedicated to enterprise risk management and compliance.

Rodríguez’s disaster research findings also influence the way he approaches social and economic topics at UAlbany. Witnessing catastrophic events first hand, he says, “strengthened my commitment to building a society where every member of the global community has the ability to thrive and succeed.” He continues, “Higher education is a critical part of this equation, and we can each make important contributions to this collective goal.”

UAlbany’s commitment toward building the thriving global community that Rodríguez describes shows. Under Rodríguez’s leadership, UAlbany conducts world-class research on the impacts of climate change; has engaged faculty, staff, and students in service missions to Puerto Rico during the aftermath of Hurricane Maria; and dedicates itself to teaching the next generation of globally engaged leaders.