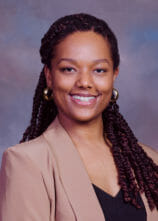 Lexington, Va. (June 25, 2021) – India Henderson, a native of West Chester, Pennsylvania, and a 2019 initiate of the University of Richmond Circle of Omicron Delta Kappa, has been named the Society’s National Leader of the Year in Creative and Performing Arts. This award is one of the Society’s highest collegiate honors, and it comes with a $1,000 prize. The announcement of the selection was made by Tara S. Singer, president and chief executive officer of O∆K. Singer said, “India Henderson is an accomplished artist in multiple areas. As a student in Richmond, she has been involved in theatre and dance throughout her undergraduate career. She is incredibly talented and well embodies excellence in the creating and performing arts area of campus life celebrated by Omicron Delta Kappa.”

Henderson received her Bachelor of Arts with a major in leadership studies from the Jepson School of Leadership at the University of Richmond in May 2021. She was also recently named the recipient of the James MacGregor Burns Award, the Jepson School’s highest honor, given to a graduating senior in recognition of their academic, service, and leadership accomplishments.

During her time at UR, Henderson served as president of the Epsilon Circle of O∆K and received the Excellence Award from the Department of Theatre and Dance. She is also an initiate of Alpha Psi Omega, the national theatre honor society. She was also named a Richmond Artist Scholar and Oliver Hill Scholar by the university.

Henderson was active in other several campus programs and activities. She served as the web designer and community service coordinator of her social sorority, Alpha Kappa Alpha Sorority, Incorporated. She was the president of Choeur du Roi A Cappella, a performing arts group. Henderson also was the associate chair and co-chair of multicultural pre-orientation programs for the Office of New Student Orientation. In addition to her campus involvements, she was a student intern for the Richmond Peace Education Center, where she engaged with local students to revitalize the Richmond Youth Peace Project.

About receiving the Omicron Delta Kappa award, Henderson said, “I feel honored to be nationally recognized for my efforts in the arts through this award! Theatre and music have been my lifelong passions and I am humbled that UR and its students, faculty, and staff have afforded me so many opportunities to learn, share, and unite my community around the arts.”

This fall, Henderson will be moving to France to teach English and solidify her French language fluency. Next spring, she will begin post-graduate training in preparation for a career in the performing arts.

Omicron Delta Kappa Society, the National Leadership Honor Society, was founded in Lexington, Virginia, on December 3, 1914. A group of 15 students and faculty members established the Society to recognize and encourage leadership at the collegiate level. The founders established the O∆K Idea—the concept that individuals representing all phases of collegiate life should collaborate with faculty and others to support the campus and community. O∆K’s mission is to honor and develop leaders; encourage collaboration among students, faculty, staff, and alumni; and promote O∆K’s ideals of collaboration, inclusivity, integrity, scholarship, and service college and university campuses throughout North America. The Society’s national headquarters are located in Lexington, Virginia.