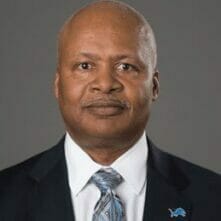 James “Jim” L. Caldwell is a 1996 initiate of the Wake Forest University (WFU) Circle, where he was the football coach from 1993-2000. He is the 2022 recipient of the Pillars of Leadership Award in Athletics.

In addition to coaching at WFU, Jim was also the head coach of the Indianapolis Colts from 2009-11 and the Detroit Lions from 2014-17. he has been a part of two Super Bowl-winning teams in his career. Jim was the assistant head coach and quarterbacks coach of the 2006 Indianapolis Colts (Super Bowl XLI), who beat the Chicago Bears. He was also the offensive coordinator of the 2012 Baltimore Ravens (Super Bowl XLVII), who beat the San Francisco 49ers. Jim also served as an assistant coach in the college ranks at the University of Iowa, Southern Illinois University, Northwestern University, the University of Colorado at Boulder, the University of Louisville, and Pennsylvania State University. Caldwell was the first African American head football coach in the Atlantic Coast Conference and remains actively involved in professional football as a mentor to many.