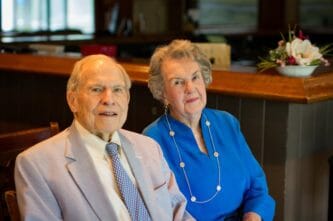 Louise and Bill Latture have a long history with Omicron Delta Kappa. Rupert Nelson Latture, one of the 15 founders of O∆K, instilled the values of the Society in his son Bill from an early age. Bill was initiated into the Alpha Circle at Washington and Lee University in 1948, and he has been an engaged member since. Bill served as a member of the O∆K Foundation Board of Trustees from 2004-18. He was named trustee emeritus in 2018. He and his wife Louise (a 1947 graduate of Randolph-Macon Women’s College and a 2017 initiate of the Washington and Lee University Circle) are longtime residents of Greensboro, North Carolina.

The Lattures recently made gifts in support of two fully endowed scholarships including one named in memory of Bill’s father. In commenting on his and Louise’s philanthropic partnership with O∆K, Bill said, “Louise and I are pleased to support O∆K ‘s scholarship program. One gift is in memory of my father. He was at Washington and Lee for 65 years, both as a teacher and a mentor. He and the other founders of O∆K believed that education and leadership were both important. Helping outstanding members of O∆K to continue their postgraduate studies with some financial support from us is very gratifying.” The couple also recently fully-funded the Louise H. Latture and William E. Latture Scholarship.