Great leaders leave a legacy in their wake, usually in the form of people who carry on the vision and values of their mentors. I had the privilege to witness that kind of leadership in action last week at the installation of our newest Omicron Delta Kappa Circle at Dallas Baptist University.

University President Dr. Gary Cook had a long-standing dream to bring OΔK to his campus to further the mission of the institution, which is to “produce Christ-centered servant leaders who are transforming the world.” As an undergraduate student at Baylor University, Dr. Cook was inducted into OΔK when Dr. Glenn Hilburn was a faculty officer. Not only has Dr. Hilburn mentored countless students over the years, he is a past national president of the Society and a recipient of the Laurel Crowned Circle, our highest honor. The connection between the two remained strong, and Dr. Hilburn has become a strong supporter of Dallas Baptist University, even donating 6,000 volumes to the university’s library. 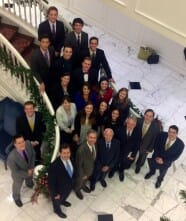 In addition to President Cook, the OΔK connection continues with DBU Board of Trustees member Charles Frazier, who is also an inductee of the Baylor Circle. These two leaders were so influenced by Dr. Hilburn’s example that they wanted to honor him by naming the new DBU Circle for their mentor. At Dallas Baptist University, the new organization is known as the Glenn Hilburn Circle of Omicron Delta Kappa.

So on December 10, we celebrated that legacy of leadership with Dr. Hilburn and charter members of the new Circle. President Cook presided over the induction ceremony, and Dr. Hilburn addressed the group and encouraged them to leave their own legacy wherever their paths take them. The charter members represent the wide range of student and faculty/staff interests at DBU, recognizing the five phases of campus life. The faculty officers are involved with the master’s and doctoral degree programs in leadership offered at Dallas Baptist.

President Cook presented each new student member with a globe of the world, to remind them that their leadership will span borders. Dallas Baptist has more than 500 international students and educational missions which take students to other countries for service learning.

I was charmed by the beautiful campus, nestled on a hill overlooking Mountain Creek Lake, about 30 minutes outside of downtown Dallas. More than 5,400 students attend DBU to pursue graduate and undergraduate degrees. Many of the impressive campus buildings are patterned after historic structures found throughout the United States. The campus chapel, where the induction ceremony took place, is a larger but proportionate replica of the first Baptist church in the U.S., built by Roger Williams in R.I. Visitors to campus will also see a building that looks like Independence Hall, and the latest hall under construction is patterned from Thomas Jefferson’s Monticello.

Dallas Baptist students are reminded daily of the legacy of our country’s forefathers. Faculty officer and Dean of the Gary Cook School of Leadership, Dr. Adam Wright takes students to Mt. Vernon, N.Y., each year to visit the George Washington Museum. A piece of the museum stands in the dining hall, commemorating Washington’s presidential oath of office and his choice to end the oath with the phrase, “So help me God.”

Prior to the ceremony I visited with David Cook, who coordinates the master’s-level Leadership program and is a charter member of the new circle. We discussed ways the circle can have a unique place in the campus traditions of Dallas Baptist University. The new circle will be affiliated with the academic leadership programs offered at DBU, but they are also developing signature programs for their circle involving leadership and service. Members will be mentored by President Cook and will have the opportunity to engage with other alumni and community leaders during circle activities.

During my address to the new circle, I asked Dr. Hilburn how many circles he thinks he is responsible for chartering in some way, and his estimate was 25. As members of Omicron Delta Kappa, we all have the ability to spread the OΔK Idea to more institutions. Most of our expansion efforts succeed because of alumni who know the impact a circle of OΔK can have on a campus. If you are currently affiliated with a college or university that does not have an active circle, contact me at NationalVP@odk.org to discuss how you might assist with our growth.