Over the last ten years, minority business enterprises accounted for more than 50 percent of the two million new businesses in the U.S. and created 4.7 million jobs. According to the U.S. Senate Committee on Small Business and Entrepreneurship, there are more than four million minority-owned companies with annual sales totaling close to $700 billion.

However, according to the National Small Business Association, 41 percent of small businesses say a lack of capital is hurting their ability to grow. For America’s Main Street businesses, having access to capital means the difference between hiring or layoffs. 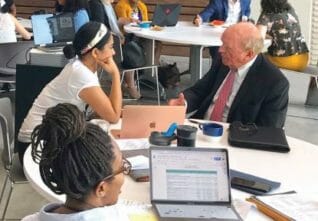 Bob Crawford (Dickinson College, 1960) agrees. After selling his business when he was in his mid-seventies, Crawford wanted to invest in  companies. He realized he didn’t want to do extensive research about large companies but wanted to connect more directly to the people involved. In talking to the CEO of the Chicago Community Trust (CCT), a 100-year-old community foundation that funds and supports the work of change-makers with an eye toward racial equity, Crawford had an idea.

Crawford spent six months touring disadvantaged areas to understand the needs of the communities and went to nine entrepreneurial programs in disadvantaged communities to understand the needs of small businesses. It was clear there was a widespread need to support small entrepreneurs. “The issue isn’t only about adding jobs. The issue is about stabilizing the community through providing opportunities for entrepreneurs to build businesses and then add the jobs,” Crawford says. “Capitalism is the answer in these areas.”

With support from CCT, this research led Crawford to form the Neighborhood Entrepreneurship Lab (NEL) five years ago. They partnered with Accion Chicago (now called Allies for Community Business or A4CB), which was already in the business of investing in entrepreneurs through loan programs. Accion identified new entrepreneurs and recommended those with growth potential to NEL for a nine-month program with mentoring, training, and developing a business plan. When that business plan, with specific investment needs, is approved, a $20,000 grant is provided for use in implementing the plan. Crawford’s primary role now is to raise funds from individuals, foundations, and corporations. Last year, he and his team raised $600,000.

Crawford said he had a realization. “If you get more high-quality small business people to start a business, they’ll stabilize the neighborhoods. They’ll be coaches, Sunday School teachers. It’s capitalism. It’s the people invested with their own economic drive,” according to Crawford.

Across the board, a key element of the success of entrepreneurship seems to come from lived experience and the human aspect. Who does well in these accelerators? People with drive and determination, and high social skillsets, notes Crawford. “They’re people-people. They’re fighters. Gutsy.” 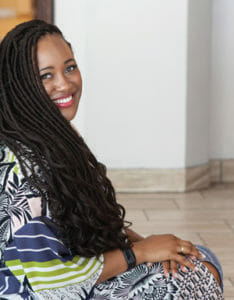 When Ammons and Schrader started, they were considered what Ammons refers to as quad outsiders: black, female, non-technical, and tech founders. Her expertise was in events; her mother’s was in human resources.

The common thread was the human element. Ammons noted that there were many kinds of software being developed to attempt to make networking better. It was “heavy on the tech and paid no attention to the human using it,” she remembers. “Because we didn’t lead with tech, we built a tech that supports the human instead of the other way around.”

The U.S. Senate Committee on Small Business and Entrepreneurship notes there are more than 11.3 million women-owned businesses in America – representing 38 percent of all firms and growing at five times the national average. This growth is encouraging but happening despite institutional barriers facing women entrepreneurs, including a funding gap estimated at $300 billion for female-owned small businesses worldwide.

Of the 41 entrepreneurs that have gone through his program, 75% were women, says Crawford. “They’re the stabilization of the community.”

Ammons said she never faced discrimination until she became an entrepreneur. “Because I was coming into a tech space, as black female founder … in 2014, that was unheard of – especially in the Southeast. They weren’t ready, back then, for founders that look like my mom and me.”

“We challenged people’s status quo. It made them uncomfortable. It’s not just a feeling; there’s data to back that up,” notes Ammons. She was the 38th black female ever to close a $1 million round of funding (her mother being 37th). “How are we even still counting that number,” she asks.

“If a supporter or funder doesn’t understand racial inequity and the reckoning happening in the U.S., I’m pretty unapologetic in sharing my thoughts on the topic. If you are someone trying to help entrepreneurs of color – we are over-mentored and under-funded. We don’t always need another homework assignment or program to complete. Send the wire, make the hire, or keep moving,” Ammons asserts. 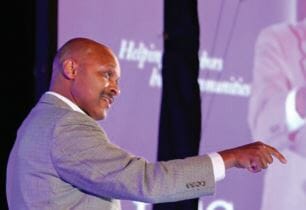 Maurice Jones (Hampden-Sydney College, 1984) is the former president and CEO of the Local Initiatives Support Corporation (LISC). This national community development financial institution is 41-years-old and has invested $24 billion in communities around the country. He thinks minority entrepreneurs need both funding and mentoring.

“Our experience is that you’ve got to do more than money. Big businesses have multiple areas of support – a CPA firm, banks, lines of credit. [Businesses] need an ecosystem to be successful. The challenge for entrepreneurs is they don’t have the resources to build that ecosystem or the other services they need to survive and grow.”

Jones notes that a key gap is that if you’re black or brown in this country, you’re likely not to have as much access to friends and family with wealth. “I don’t want to underplay what’s needed in addition to capital,” says Jones. “This gap means when you’re trying to launch an entrepreneurial exercise, where friends and family fund the first chapter, you’re at a disadvantage,” according to Jones.

Ammons from Mixtroz agrees with this. “Pay attention to your network. Deals get done not only because of who you know but who knows you. Many times, the most extraordinary doors get opened because of a touch you had 2.5 years ago.”

Jones recently took the helm at OneTen, a newly formed venture launched by more than 40 Fortune 500 corporations working to hire and advance one million Black Americans without four-year college degrees into family-sustaining jobs and careers over the next ten years.

“There’s a huge wealth gap. On average, white families ten times more wealth than black families. This is one of the biggest risks to the American project–period,” reveals Jones. A living-wage and family-sustaining jobs are foundational to all the issues in America: the homeownership gap, wealth gap, and the health gap, according to Jones. He’s concerned we no longer have multiple pathways to get to family-sustaining careers. 60 percent of the population does not have a college degree. “[If we depend on that] that’s setting ourselves up for economic disaster. OneTen is going to start with blacks and move on to other cohorts,” Jones notes.

He continues, “We’ve never had a private sector commitment of this scale – money and jobs. What’s different about this effort is the demand side is coming to the table first – making these jobs and promotions available. With this information, the job to be done is to prepare Black talent and provide the wrap-arounds to make them successful. It’s an exciting opportunity.”

Ultimately, all the success of entrepreneurship comes down to the people, the ones Crawford was chasing as he moved into his “retirement” career. As Tope Folarin, vice president of content and storytelling at LISC, said in a published conversation with Jones, “I believe we are all walking stories, and so many of us are just waiting for an opportunity to announce that we exist, to be heard, and for our humanity to be recognized by others.”

Holly D. Gordon is a 2001 initiate of the University of Richmond Circle. To read more articles from The Circle, click here.