Congratulations to the Baylor Lady Bears for winning the 2019 NCAA Division I Women’s Basketball Championship! The Baylor University Circle was established in 1962, and it remains one of Omicron Delta Kappa’s most outstanding. The university’s president, Dr. Linda Livingstone, is a 1980 initiate of the Oklahoma State University Circle, and she played basketball there herself.

As of yesterday afternoon our O∆K 2019 NCAA Men’s Basketball Bracket is definitely busted, but we’re delighted to have three member schools (Texas Tech, Virginia, and Auburn) in the Final Four. We had a circle at Michigan State at one time. Here’s hoping that someone in East Lansing might begin to advocate for a re-chartering and getting some O∆K luck. In the meantime, go Red Raiders, Cavaliers, and Tigers!

Well, our O∆K 2019 NCAA Men’s Basketball Bracket isn’t entirely busted. Ten of the teams in the Sweet 16 are schools we picked using our methodology. If all goes right, our Final Four of Virginia Tech, Kentucky, Florida State, and Virginia is still possible.

If your house or office is anything like mine, it is awash in newspaper clippings, stat sheets, and countless versions of family brackets. It’s hard to keep up with all the analysis and deftly navigate possible bracket busters. As a Davidson College alumnus, we already ceded our season to an early loss in the NIT. If you’re still looking for a hot new method, I’d encourage you to look at Davidson math and computer science professor Tim Chartier’s mathematical method. Dr. Chartier and his students have built a website where you can choose the modeling method and make minor adjustments for a final result. Visit it at marchmathness.davidson.edu! If you want to consider a method that has nothing to do with basketball, consider our annual O∆K Bracketology.

If you aren’t familiar with annual O∆K tradition, here are the rules:

You can see the official O∆K bracket below. We are predicting an all-O∆K Final Four with three ACC schools and one SEC institution. In the final, it’s the University of Kentucky, established in 1925 triumphing over Virginia Tech, where the circle was established in 1956. If the difference in years matches up to the margin of victory, it’ll be a blowout!

There are lots of colleges and universities with circles in tournament. At this time, I hope many will remember those collegiate members who are participating in this annual American ritual as players, managers, trainers, cheerleaders, musicians, and fans. Leading can be fun too, and we celebrate not only those involved with the men’s NCAA Division I tournament, but those participating in the women’s DI tournament as well as those connected to the DII and DIII, NIT, and NAIA championships.

May your favorite team be successful! 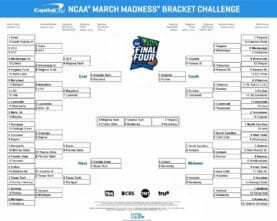 The 2019 O∆K bracket may be viewed best by clicking on the link below.