The Omicron Delta Kappa Society and Educational Foundation Board of Trustees have selected Congresswoman Donna E. Shalala (University of Miami, 2002) as the 2020 recipient of the Laurel Crowned Circle Award. First presented in 1980, the Laurel Crowned Circle Award is the highest individual honor awarded by Omicron Delta Kappa. Recipients are exceptional leaders in their respective fields or noted for their service in advancing leadership development. Award winners also demonstrate the highest ideals of the Society: scholarship, service, integrity, character, and fellowship.

The award will be presented on Wednesday, November 11, 2020, at 4:30 p.m. (Eastern) in a virtual ceremony. The ceremony will be broadcast on the ODK HQ YouTube channel. 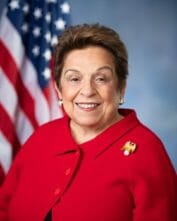 Shalala currently represents Florida’s 27th congressional district. Previously, she has served as president of the University of Miami (2001-15), chancellor of the University of Wisconsin – Madison (1988-93), and president of Hunter College (1981-88). She was the inaugural head of the Clinton Foundation. Shalala was the 18th Secretary of the Department of Health and Human Services (1993-2001). In 2007, President George W. Bush appointed Shalala and Bob Dole to lead the President’s Commission on Care for America’s Returning Wounded Warriors. Earlier in her government career, she was also the U.S. Assistant Secretary of Housing and Urban Development for Policy Development and Research (1977-80).

In recognition of her civic contributions, numerous organizations and individuals have honored Shalala. President George W. Bush awarded her the Presidential Medal of Freedom in 2008. In 2010, she was presented with the Nelson Mandela Award for Health and Human Rights. Shalala is a 2014 recipient of the Harry S. Truman Legacy of Leadership Award. She was selected to be in the first class of inductees in the Government Hall of Fame in 2019, and she has been presented with more than 50 honorary degrees.

Shalala earned her undergraduate degree from Western College for Women (now known as the Western Campus of Miami University). She received her Master of Arts, as well as her Ph.D., from Syracuse University. Before beginning her administrative and government careers, Shalala was on the faculty at Baruch College (part of the City University of New York system) and Teachers College, Columbia University.

Omicron Delta Kappa Society, the National Leadership Honor Society, was founded at Washington and Lee University in Lexington, Virginia, on Dec. 3, 1914. A group of 15 students and faculty members established the Society to recognize and encourage leadership at the collegiate level. The founders established the O∆K Idea—the concept that individuals representing all phases of collegiate life should collaborate with faculty and others to support the campus and community. O∆K’s mission is to honor and develop leaders; encourage collaboration among students, faculty, staff, and alumni; and promote O∆K’s ideals of scholarship, service, integrity, character, and fellowship on college and university campuses throughout North America.  The headquarters are located in Lexington, Virginia.