A native of Bristol, Tennessee, Rupert Nelson Latture first came to Washington and Lee in 1911 as an undergraduate. He earned his Bachelor of Arts in 1915 and his Master of Arts the following year. In addition to conceiving, along with classmate J. Carl Fisher, the idea of a campus leadership society which ultimately became Omicron Delta Kappa, he was elected to Phi Beta Kappa.

As a student, Latture was a member of Delta Upsilon, president of the YMCA, and a French student instructor. After graduating from W&L, Latture taught at the Miller School outside Charlottesville, Virginia, before serving in World War I from 1917 to 1919. While in France, he was awarded the Croix de Guerre by the French Army.

Upon returning to the United States, Latture served as principal of the Central Academy in Stuart, Virginia, for one year. In 1920, he returned to Washington and Lee as an assistant professor of romance languages. As a member of the faculty, he held several positions, including chairman of the political science department and head of the freshmen program. 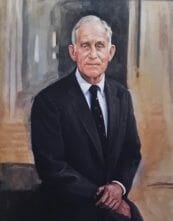 Latture retired from active teaching in 1962. At that time, he was asked by then-President Fred C. Cole to stay on as an assistant to the president. He held that position for 21 years, serving Cole and later President Robert E.R. Huntley and John D. Wilson. He again retired in 1983 and turned his attention to special research projects associated with the university.

Latture also served for many years as an adviser to the W&L Mock Political Convention. Although he missed the first convention in 1908, he attended every one through 1984. He was also an elder emeritus of the Lexington Presbyterian Church.

In 1980, Latture received the honorary Doctor of Laws degree from Washington and Lee. The citation for the degree called Latture a “ ’mover’ of the university, evoking in us sentiments of admiration, pride, and great respect. Of all the honorary degrees ever conferred by Washington and Lee University, none has ever been awarded with the special gratitude and affection that accompany this proclamation.” Latture received O∆K’s Laurel Crowned Circle Award in 1990.

Obituary from the Greensboro News and Record