The Theta Circle at the University of Akron celebrated its 100th anniversary at a dinner and reunion on Thursday, March 31, 2022. 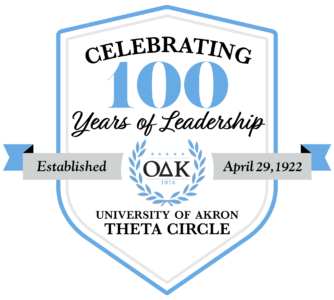 The Theta Circle has had a very distinguished history. First established on April 29, 1922, the circle has continued to aim for high achievement and was most recently recognized with 2013, 2014, 2016, 2020, and 2021 Circle of Distinction honors. In 2015, the Theta Circle was named a Superior Circle for that year, and in 2017, it received one of the Society’s prestigious Maurice A. Clay Leadership Development Initiative Grants.

Members of the circle have been recognized and involved with the Society at the national level. Tom Vukovich (University of Akron, 1977), a long-time advisor to the circle, served as the Society’s national vice president from 1998-2000. He and his wife Diane (University of Akron, 19980) have not only created a scholarship benefitting students from Ohio, but they have also funded a grant program to support Ohio circles. In 2021, Tom received the Society’s highest volunteer honor – the Jack Morgan Award for Lifetime Service to Omicron Delta Kappa. He is also the recipient of O∆K’s Hogle and Roark awards for service. Diane is a 2018 recipient of the Society’s Eldridge W. Roark, Jr. Meritorious Service Award. Caroline Sulewski Sangal, a 1997 initiate of the Theta Circle, served as a national student officer of the Society and is also a Roark Meritorious Service Award recipient. Seven University of Akron presidents were initiated members of the Theta Circle.

Congratulations to the Theta Circle at the University of Akron for its success and accomplishments in providing more than 100 years of leadership to the campus and the community.