Between Friday, Feb. 19 and Monday, March 2, I spent 11 days on the road.  I’ve also been in out and of the Charlotte airport several times; however, there is no truth to the rumor that we are going to be setting up a satellite office in a concourse there.  There was even one night when I got to join a lot of other weary travelers and slept on the floor.

As anyone who travels knows, there is a lot that can go wrong.  Flight cancellations, weather in general and misplaced luggage (which eventually came back – both times).  However, travel can also provide some wonderful opportunities to meet people and to learn about their leadership journeys.

Working backwards in my schedule, I spent time last Sunday with Betsy and Bill Johnston in Bradenton, Fla.  Bill is a former O∆K Foundation President and was the 2014 recipient of our Laurel Crowned Circle Award.  Bill was given this award in recognition of his extraordinary leadership as a businessman, educator and philanthropist.  Bill and Betsy are also the  founders of the Johnston Challenge which matches gifts over $25 or more from new donors and has secured support from 500 individuals to date. 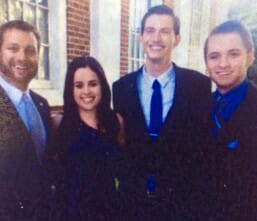 I spent the earlier part of the weekend in the greater Miami area visiting Foundation Trustee Sally Jones Hill  and attending the drive-in workshop at the University of Miami in Coral Gables.  Steve Priepke, Nicole Garcia, Matt Barnes and Dillon Knop all did a great job in hosting the workshop which also included members from the Florida Southern College and Florida Atlantic University circles.  The folks from Florida Southern drove nearly five hours, each way, to participate.  Wow!  Cie Chapel, a member of our National Advisory Council, also joined us for part of the program, and O∆K member and Miami’s Vice President for Student Affairs, Dr. Patricia Whitely, was the keynote speaker.

Earlier in the week, I had the great pleasure of serving as the installing officer of our newest circle at Idaho State University.  ISU makes the 294th active circle of our organization.  Brooke Barber, Jake Johnson and Lowell Richards, along with their students, were tremendous hosts.  I was most impressed to learn about their efforts with Benny’s Pantry, and it was great to meet the students who were the circle’s intentional representatives of the five phases of collegiate leadership. 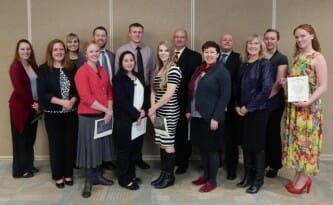 I also had the chance to visit with two of O∆K’s supporters over that trip including the benefactor of our New York Times in Leadership initiative.   In FY 2016, we intend to provide access to this platform to the first 100 circles that express an interest in the case studies, selected readings and videos offered.

As I have written in this post, I have been chronicling my trip backwards; so, I am now at the beginning.

On Friday, Feb. 19, I woke up at 2:30 a.m., got in my car at 4:12 a.m. (and the temp said 1 degree) and drove to the airport in Charlottesville.  After flying across the country, I was picked up by Ben and Alexa from the University of Tacoma Washington Circle.  This circle was installed in 2013 by National Vice President Michelle Burke.

My hosts took me on a great tour of the campus which has primarily been built into the old industrial buildings in downtown Tacoma.  There’s even a railroad cross light right outside of the business school.  The members of the circle also took me to the “Giving Garden” supported by O∆K at the school which provides food for Tacoma ‘s  Good   Neighbor Café, a facility providing breakfast and dinner to homeless and low-income individuals.

That evening, I spoke at the initiation ceremony for the spring 2015 inductees of the circle.  It was such an impressive group of current and new members, and their commitment to sustainability and social justice was evident.  The other speaker was a gentleman named Mike Johnson who coordinates the Climbing Out of Homelessness project in Tacoma.     Part of my speech focused on transformational leadership, and Mike’s work is definitely the embodiment of that. I  was  with the members of the circle until nearly 10:00 p.m. (PST); 1:00 a.m. (EST).  However, as the photo shows, I was having a great time with our collegiate leaders.  Omicron Delta Kappa is fortunate to have the participation of not only the best students on the planet, but also some of the simply best people. 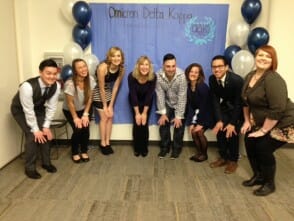 A few final thoughts about my recent journeys:

May each member of our organization have a warm and cozy weekend, and I hope that all of your journeys, leadership journeys or otherwise, are as enriching as those provided that I have experienced.  Just be sure to be safe getting wherever it is you are going and enjoy the best of life’s travels.