Article published in the Winter/Spring 2017 issue of The Circle. 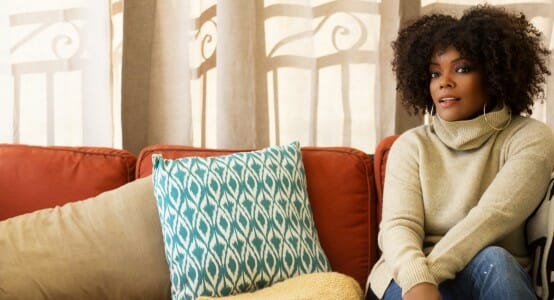 If you ask Yvette Nicole Brown to define leadership, she will answer, “A leader is someone who is willing to stand up for what’s right when no one else will. He or she stands alone and inspires others to join in. A good leader is someone who makes the right decision, even if it is unpopular.”

While Brown does not think of herself as a leader, her willingness to stand alone, listen and be positive is what helped her become a first-generation college student, graduate of the University of Akron and member of Omicron Delta Kappa. These traits also gave her the courage to pursue her dreams.

Brown currently plays Dani in the 2015 version of “The Odd Couple” on CBS. She also starred as Shirley Bennett in the NBC comedy series “Community.” Previously, Brown performed in a collection of hit television shows and films including “The Island,” “Dreamgirls,” “House,” “The Office” and “Two and a Half Men.”

Brown grew up in Cleveland, Ohio, where she says, “There was no straight path to success. My mother made it clear when she said, ‘You can do what you want, but if you want a good life, go to college and earn a degree.’ A degree gives you so many options.”

A degree provided Brown with the diverse skill set required to work in offices in the entertainment industry in California while auditioning for acting roles. Office work allowed Brown to not only support herself, but to learn how the entertainment business worked behind the scenes.

She also learned what was possible in her life while pursuing her bachelor’s degree in journalism and mass media. The University of Akron’s diverse student body, radio station and media department opened many doors, as did two important mentors, Karla Mugler and Carmella Farruggia.

Mugler, who was dean of University College at the time, recently retired as the associate vice president for Student Services and OΔK faculty secretary. Farruggia is a history professor at Akron. Brown explains that she would not be the same person or have achieved the same level of success without the support and encouragement of these two women.

“In my first year of college, I was very open to adults and began to listen to all of their advice. I learned that if you are open, you will find champions all around you.”

“Sometimes young people have this ‘us against them’ mentality where they see students versus administrators and professors, but it is important to learn from all the people around you. Sit at their feet and say, ‘Tell me about your life. Tell me about the world.’”

Brown believes that this willingness to listen and learn is a skill that creates strong leaders, as well as optimism and positive expectations.

“I am very clear to my fans and communities when I tell them, ‘We don’t fight here. We try to be better.’ I have always kept this idea that if you are in my life, you have to be nice or you have to go.”

Brown manages a fine balance: she is humble and grateful, yet has only the highest expectations for herself. Brown says, “Sometimes, you look on social media and see that everyone is doing so well…. They have perfect kids and a great house, and it seems as if everyone is getting a promotion. Know that you don’t have to wish ill for your friends. It’s their season of good, and you’ll have your own season of good. Good comes to us all.”

“When the bad comes, ask yourself, ‘What am I supposed to learn from this experience? What lesson can I take from this?’ It’s okay to say, ‘Let me be the cautionary tale so that we can all learn from my mistake.’”

It is hard to see any bad coming to Brown while she is playing one of her favorite characters on a popular television show, but if challenges arrive, there is no doubt that Brown will have the courage to stand alone with the grace and wisdom of a true leader.