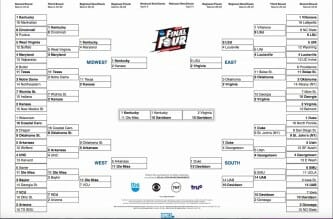 It’s the moment we’ve all been waiting for – the unveiling of ODK’s annual bracket for the men’s NCAA basketball championship!

I’ve been sharing the ODK bracket since I became National President in 2012. My logic in picking the winners in the bracket is pretty simple – ODK always wins.

Here’s how it works:

If a campus has a circle of ODK, they win.

If both campuses have a circle, the campus with the oldest circle wins.

I should note that in 2013, I accurately picked Louisville to win it all. I should also note that that same year we hired a Louisville alum, Dr. Tara Singer, as ODK’s new Executive Director. It was a good year to be associated with Louisville.

So, without further ado…here’s this year’s ODK Bracket…

Congratulations Davidson; sorry Kentucky (now, that would be something!!).