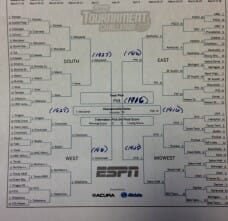 Update:  April 5, 2016: Congratulations to Villanova University where the ODK circle was established in 1988!!

Update:  March 21, 2016:  Well, our bracket is clearly BUSTED.  Cincinnati and Pittsburgh went out early, very early!  In the meantime, members of ODK should be cheering for Kansas, Maryland, Miami, or Virginia – the only four remaining ODK institutions in the tournament.  The challenge is that Kansas plays Maryland.  According to ODK Bracketology, Maryland should win with its 1927 founding date.

It is March Madness time again around the country and at the national headquarters of Omicron Delta Kappa.  An annual ritual at the train station is the development of the ODK bracket where the location of a circle matters as does the circle’s founding date.

The “rules” for our annual competition are as follows:

This year’s Final Four, according to ODK bracketology, has Maryland (1927) playing Cincinnati (1931) in one semi-final and Pittsburgh (1916) playing Virginia (1925) in the other semi.  When Maryland plays Pitt in the final, Pitt should win with its 1916 founding date.

The first year that we did this was in 2013.  The winner of ODK Bracketology was Louisville, and they won the national championship that year too.  And besides, I got hired (typed the three-time degree recipient from the school).  Since the Cardinals aren’t playing this year, I’ve become a huge fan of each of the circles in the ODK Final Four.  May one of them win!!!