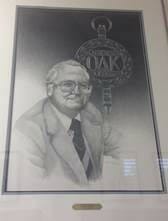 Glenn Hilburn, who served Omicron Delta Kappa as its National President, from 1978-84 and again from 1985-86, passed away earlier this week at the age of 86.  During his tenure, the O∆K Foundation was established, our first executive director was selected, and membership continued to grow.  Glenn was devoted to the Baylor University Circle, and a circle-specific scholarship fund has already been established in his name.  A tribute to his service is included in the inscription of the O∆K monument at Baylor . The Dallas Baptist University Circle is known as the Glenn Hilburn Circle of Omicron Delta Kappa because of the influence Glenn had on the founding members of that circle.

Dr. Hilburn would occasionally call the office to offer historical background information and share stories.  He was incredibly helpful to Mike Nichols in preparing The Laurel Crowned Circle:  Omicron Delta Kappa and 100 Years of Leadership.  It was such a joy to have him here with us for the 2014 Biennial Convention and Centennial Celebration.

It was such a joy to have him here in Lexington for the 2014 Biennial Convention and Centennial Celebration.  I have a special memory of him talking with Coach Mike London and the two of them discussing mutual friends from the world of intercollegiate athletics.

His official obituary is posted here.  We join the Baylor and Waco families in sending our sympathies to his sons, Kelly and Jeff, and their families.