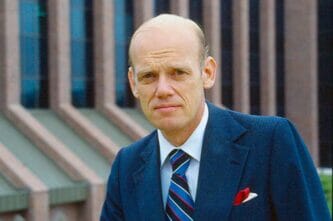 Roskens was born and raised in Spencer, Iowa. He earned his undergraduate degree from the University of Northern Iowa in 1953 and his master’s degree from the University of Iowa in 1955. Roskens began his higher education career by serving as the assistant dean of men at Iowa from 1956-59, and he received his Ph.D. from Iowa in 1959. That same year, Roskens was appointed dean of men at Kent State University. He spent the next 13 years at Kent State, moving from his role in student affairs to becoming executive vice president for administration and a professor of educational administration.

In 1972, Roskens was named chancellor of the University of Nebraska Omaha (UNO). He served in this role until 1977. At that time, Roskens was appointed president of the University of Nebraska System, a position he held until 1989. UNO honored him with the Order of the Tower award, the school’s most notable non-academic recognition, in 2009. In 2010, UNO further honored Roskens and his wife with the naming of the College of Education in their honor.

Following his higher education career, Roskens served under President George H.W. Bush as the administrator of the United States Agency for International Development from 1990-92.

Roskens was a charter member of the Kent State Circle when it was chartered on October 22, 1965.  In appreciation for his many contributions to the organization, he was presented with O∆K’s Meritorious Service Award in 1978 and the Distinguished Service Key in 1996.

During Roskens’ tenure as national president, O∆K moved into a new suite of offices at the University of Kentucky in 1987. He oversaw the hiring of William S. Zerman (University of Arkansas, 1982) to fill the position of executive director after the retirement of Maurice A. Clay (University of Kentucky, 1954). Roskens also presided at the Society’s 75th anniversary celebration, held in 1989 at Washington and Lee University.

In his role as Foundation President, Roskens oversaw the organization’s first major fund drive, which succeeded in raising more than $100,000 to support leadership development programs, scholarships, and circle resources.

In 1993, Roskens elected to serve as the executive officer of Action, International. This organization was made up of former heads of state who would get together to discuss three or four major issues and offer recommendations to sitting heads of state. The heads of state who Roskens worked with included Helmut Schmidt, Gerald Ford (Florida Southern College, 1984), and the former leaders of Australia and Canada.

In 1999, Roskens was selected to be honorary consul general of Japan for Nebraska, Missouri, Kansas, and Iowa. In this role, he was responsible helping to facilitate the exchange of information from the governors and business leaders in each of each of these U.S. states and those leaders in Japan. He coordinated the annual conference which alternated between the U.S. and Japan. Roskens served in this role for two five-year terms. At the conclusion of his service, he was invited to a ceremony with the prime minister and emperor of Japan where he received that country’s highest honor.

In addition to being a member of Omicron Delta Kappa, Roskens was a member of Sigma Tau Gamma. He also served his fraternity as its national president.