Each year, Omicron Delta Kappa recognizes its most outstanding student leaders with the Gen. Russell E. Dougherty National Leader of the Year honors. This program is named in memory of Gen. Russell E. Dougherty (University of Louisville, 1947). Gen. Dougherty was a one-time staff member with the Federal Bureau of Investigation. He also served in the U.S. Air Force as commander in chief of the Strategic Air Command and director of strategic target planning.

The Society recognizes a student in each of the five pillars of campus life celebrated by O∆K: academics and research, athletics, service to campus and community, communications, and creative and performing arts. Each of these individuals receives a $1,000 award. The committee also selects one student to receive the Gen. Russell E. Dougherty National Leader of the Year Award, which comes with a $4,000 prize. In 2022, there were no qualified communications or creative and performing arts candidates for this honor. 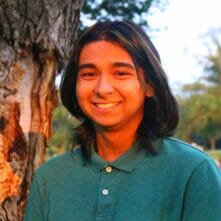 Gen. Russell A. Dougherty National Leader of the Year

M Pease, a 2020 initiate of the Sigma Circle at the University of Maryland, College Park (UMD), graduated with a 4.0 GPA in May 2022. They earned a Bachelor of Science with a major in psychology and minors in Asian American studies and public leadership. M was also the featured student speaker at the university’s main commencement ceremony.

M is deeply involved in research. They worked as an undergraduate student researcher at the UMD Gender, Culture, and Health Laboratory, a research and communications assistant at the Prevention and Research Center in the UMD School of Public Health, and a first-year innovation and research experience student researcher in the UMD Clinical and Cognitive Neuroscience Laboratory. Between 2019 and 2021, M served as either author or co-author on two peer-reviewed publications, four publications in progress, one book chapter, and nine additional publications and reports. In addition, they participated in generating18 research publications and invited talks. M also served as a teaching assistant for six courses. Their honors thesis, “Anti-Transgender Distal Stress and Gender Minority Young Adult Mental Health: The Mediating Role of Gender Dysphoria and Emotion Dysregulation,” was successfully defended in November 2020.

Outside the classroom, M has served as a senator in the UMD University Senate, a member or co-chair of nine committees and task forces, and a Maryland General Assembly Legislative Intern. Named the Col. J. Logan Schutz Omicron Delta Kappa Leader of the Year by the Sigma Circle, they were also awarded nine additional scholarships and honors. In addition, M was named to the Distinguished Dean’s List of Outstanding Students every semester at UMD. 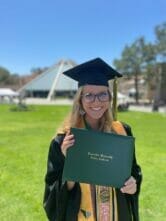 Natalie Bergler, a 2020 initiate of the Concordia University Irvine (CUI) Circle, graduated in May 2022 with a Bachelor of Science with a major in liberal studies and a minor in global cultural studies. She had a 3.95 GPA and was on the Dean’s List for three years.

Natalie participated in an “Around the World” study abroad semester, spending five months traveling in 14 countries, focusing on both academic enrichment and service projects. She worked as an on-campus math tutor for three years, advancing to become the lead math tutor for the university. As the lead tutor, Natalie was responsible for training eight other student tutors.

As the Women’s Ministry Coordinator, Natalie organized small groups and supervised 14 Bible study leaders. She also planned fellowship events for groups of up to 60 students. In addition, Natalie served as secretary and then president of the CUI Circle.

Natalie will spend the next year as a FOCUS missionary intern. After the conclusion of her internship, she will begin student teaching and working as a substitute teacher, with the goal of leading her own elementary school classroom in Fall 2023. 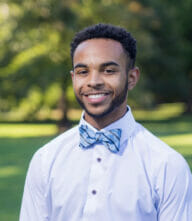 Service to Campus and Community

Jacob Thomas, a 2020 initiate of the Wake Forest University (WFU) Circle, graduated with his bachelor’s degree in biochemistry and molecular biology in May 2022 with a 3.87 GPA. At WFU, he was a Joseph G. Gordon Merit Scholar and received a full-tuition scholarship. Jacob served as president and secretary of the Black Student Alliance (BSA), leading a nine-member executive team and more than 300 members. The BSA raised more than $23,000 to refurnish the group’s on-campus lounge during his tenure as president.

Jacob also served as a resident adviser, a member of Dash Corps, and a Branches moderator within the Office of Civic and Community Engagement. He has served on three university committees related to COVID-19 safety protocols and diversity, equity, and inclusion issues. Within those committees, Jacob contributed to initiatives such as revising WFU’s “Vision for Campus Life” statement to enhance inclusivity efforts, revising the university’s bias response policy with a restorative justice model, and enhancing student organization collaboration efforts during COVID-19.

Jacob has conducted undergraduate research in art therapy, received a $4,000 grant from the WFU Scholars Office, and presented findings at the school’s Undergraduate Research Day. In collaboration with a pediatrician at Wake Forest Baptist Health, he contributed data to an article published in the Journal for Vulnerable Children and Youth Studies. He is a member of the Kappa Alpha Psi Fraternity, Incorporated. 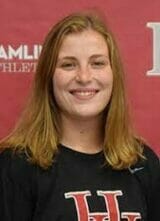 Maggie Gavic, a 2020 initiate of the Hamline University Circle, graduated in May 2022 with a Bachelor of Arts with a major in psychology, including a concentration in forensic psychology and criminology/criminal justice. She also earned a minor in forensic science. Maggie had a 3.96 GPA and was a recipient of the Presidential Academic Scholarship. She was also on the Dean’s List for three years.

A four-year member of the Hamline University NCAA Division III Volleyball Team, Maggie spent 30 hours a week devoted to her student-athlete role. During her tenure, the team advanced through the first round of playoffs for the first time in Hamline’s history. Maggie spent the offseason after her final season providing leadership to the young members of the team.

In addition to being a student-athlete, Maggie served as a Legislative/Public Policy Intern for the Minnesota Alliance on Crime and was the Student Lead Dispatcher for Hamline Public Safety for nearly three years. In addition to her membership in Omicron Delta Kappa, Maggie is an initiation of Phi Beta Kappa and Psi Chi honor societies.