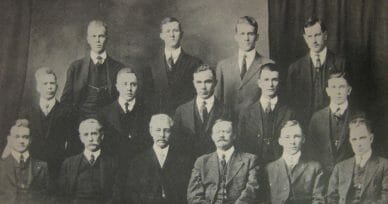 Today is Founders’ Day. The story goes something like this …

In early 1914, Washington and Lee student J. Carl Fisher brought up the idea of creating an honor society that would recognize collegiate leadership with fellow student and close friend Rupert Latture. The two soon included mutual friend William Brown in the discussion.  Today, we consider these students as the three principal founders of the Omicron Delta Kappa Society.

Several months later, on December 3, 1914, Fisher, Latture and Brown identified and invited twelve additional men to join them in a small office in Reid Hall on the campus of Washington and Lee University to formally establish Omicron Delta Kappa.

While we don’t know for sure if the events transpired exactly in this way, one thing is certain: the idea that Fisher, Latture and Brown shared with twelve additional individuals, including the school’s president and the dean of engineering, has lasted nearly a century.

Each of us embodies the very idea that the fifteen founders espoused on that winter evening 99 years ago today.

This year, OΔK Founders’ Day coincides with the national day of giving at the beginning of the holiday season.  #GivingTuesday (www.givingtuesday.org) recognizes and celebrates nonprofits such as OΔK that assist individuals in developing skills, continuing their educations and contributing to their communities.  OΔK does this regularly in support of our campus leaders of today as they become the community leaders of tomorrow.

As a tribute to our Centennial milestone a year from today – on December 3, 2014 – Betsy and Bill Johnston have issued a challenge to every member to support our 100th anniversary with an annual gift.  During OΔK’s centennial year, the Johnstons will match a first-ever gift of at least $25 or more! That means a gift of $25 turns into a gift of $50!  Previous donors who increase their annual gift by more than $25 will have their increase matched by the Johnston Challenge as well.

Join me in honoring our Founders by becoming a trailblazing “Founder” for our Society’s second century. Make your own new first-ever gift of at least $25 today or renew your annual gift by clicking here (be sure to select Centennial Campaign/Johnston Challenge in the drop down menu).

On this year’s #GivingTuesday, your support truly will help OΔK provide excellence in leadership education, programs and scholarships for exceptional college students’ nationwide, special leadership educational opportunities and improved services to our Circles across the country.

With more than 278,000 OΔK members initiated at 300 college campuses across the country, the OΔK Idea – recognizing and honoring collegiate leadership across five phases of campus life – was an idea that was built to last.

Help ensure that the OΔK Idea lasts well into its second century!