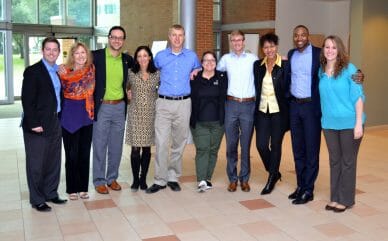 The Board of Directors and Foundation Trustees met in Jacksonville, Fla. at Jacksonville University this past weekend. My thanks to Dr. Kristie Gover, JU’s Dean of Students, for being such a gracious host while the boards gathered in sunny Florida!

While I’ve taken to sharing my written report to the boards with you through this blog, I thought I’d take a bit of a different approach this time around.

I could tell you about how we’re tracking within one percent of last year’s membership numbers to date; reminding you that last year’s 8,417 members were the most initiated in our Society’s history.

I could tell you how we’ve chartered three new circles to date, ahead of last year’s numbers at this time and on track to charter several more in the next 12-18 months.

I could tell you about the tremendous fundraising efforts of the Ο∆Κ Foundation, that year over year, the Foundation is ahead of FY 13 by 20 percent.

Instead, I want to tell you about the actions the boards took to further position Ο∆Κ for our “second century.”

The board adopted revisions to the extension process – the process through which we charter Circles at new campuses – that expedite the petitioning and application process from start to finish. The revisions, proposed by the National Membership Committee under National Vice President Michelle Burke’s leadership, maintain the rigorous standards our Society has always had for chartering a new circle while ensuring that members of the petitioning group itself are present for the chartering and induction. Too often the extension process runs long (anywhere between 18-24 months), with students who initiated forming a circle on their campus already having graduated by the time the circle is finally established. It is my hope that we will realize precipitous growth at a faster rate than we have historically due to this change.

The board approved first-ever “Accepted Guidelines for National Nominations and Elections,” as proposed by the Governance Committee under At-Large Member Kathy Smith’s leadership. These guidelines articulate clear and transparent procedures for nomination and election to the Society’s Board of Director as well as the National Advisory Council. The guidelines further formalize the process by which candidates for national service are identified, vetted and elected/appointed.

The adopted guidelines call for a formal “call for nominations” to be issued to our members in the next several weeks. I am pleased to announce that Dr. Steve Bisese, past national president, has agreed to serve as chair for this year’s nominating committee. I encourage you to consider serving our Society. It is among the most rewarding experiences you will ever have.

Dr. Singer also unveiled wireframes of ODK’s new and improved web site, to be formally unveiled in time for centennial in June. The redesigned web page provides a clean, professional and engaging web presence for current and prospective members. Phase two of the comprehensive web design will include an expanded members-only interface as well as enhanced merchandise and donor platforms.

The board heard reports from Executive Director Dr. Tara Singer and headquarters staff about this summer’s centennial celebration. To date, confirmed speakers include Shane Lopez, Senior Researcher with Gallup and author of Making Hope Happen; Chante’ Chambers, Vice President of Recruitment, Teach for America; Ellen Heffernan, Partner, The Spelman and Johnson Group; and Michael Riley, CEO and Editor-in-Chief, The Chronicle of Higher Education.

Looking beyond centennial, the board approved the sites for the 2015 regional drive-in meetings, board meeting locations through 2016, and the site of the 2016 National Convention in Grand Rapids, Mich.

Throughout the board’s work, we’re looking to make ODK stronger.

The Long Range Planning Steering Committee reviewed the work of the seven strategic priority groups while we were together in Jacksonville. We hope to have a draft of the long range planning document in place by mid-March, and are on track to roll out the long range plan at centennial this June.

Centennial is just a few short months away, and plans are coming together nicely for what promises to be a memorable (and historic!) celebration. But much work remains – both for centennial and for what comes after centennial.

Our Society is in a strong position as we enter the final stretch of our first century…the best is yet to come!