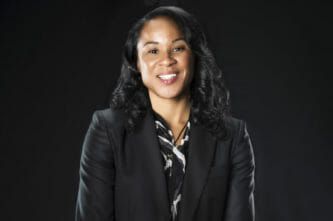 Dawn Staley didn’t plan to be a basketball coach. When Dave O’Brien, the then-athletic director at Temple University, first approached her about coaching the Lady Owls program, she declined. She was playing in the WBNA and representing the United States as a member of the Olympic team. However, with much encouragement by O’Brien and his colleagues, she took over the Temple program in 2000, and by 2004, three of her teams had been invited to play in the NCAA tournament. Coaching at Temple was just the start of her success as a coach. In 2017, she coached the University of South Carolina Lady Gamecocks to the national championship. She’s the current coach for USA Basketball and will be in Tokyo in 2020 for the Summer Olympics.

Last fall, Staley was initiated into the University of South Carolina – Columbia Circle of Omicron Delta Kappa and was the featured speaker at the ceremony. In addressing her fellow initiates, Staley stated, “As I reflect back on my evolution as a leader and qualities that experts say make a great leader, I’ve discovered that most leaders aren’t born with leadership qualities and that everyone can lead, you just have to want to. My personality and industry dictated my leadership qualities, and yours should do the same.”

Although she certainly has had significant accomplishments as a player and coach, Staley’s leadership runs much deeper than a statistic or a sports reel. She has proven her leadership abilities by advocating for her communities, players, and profession.

Whether it is to her hometown of Philadelphia, Pennsylvania or in the cities Staley played and coached in over the years, she continuously gives back. After winning her first Olympic gold medal in 1996, she established the Dawn Staley Foundation. Staley’s foundation was created to proactively offer at-risk children in Philadelphia the tools they need to become productive, responsible adults. The foundation accomplished this goal through after-school programs, summer basketball leagues, mentoring, and an annual community celebration called “Day in the Park.”

After becoming the coach at the University of South Carolina in 2008, Staley noticed a need in the region and created another non-profit called Innersole. The organization provides shoes to children in the region around the university. In 2015, Innersole made a significant impact by distributing numerous pairs of shoes to school children after the devastating floods which impacted many homes in Columbia. In describing the inspiration for Innersole, Staley said, “I grew up not caring what I looked like from my ankles up. As long as I had a new pair of sneakers on my feet, I felt like I could conquer the world. Kids that have a new pair of sneakers — it changes their lives. That moment that they receive a box with a new pair of shoes in it that is a moment that is captured for a lifetime. Every time there’s a new pair of sneakers that they get, they relive that, and we want to be a part of it.”

A good coach cares about the game, a great coach cares about the players, but an excellent coach cares about both. Staley’s passion for the game is clear, and she has said, “Basketball is a tremendous sport. It is a sport that continues to grow, and I want to be someone who helps the sport grow because the sport has helped me grow and mature into the woman I am today.” At the University of South Carolina, her teams have had considerable success including winning four Southeastern Conference (SEC) regular season championships and four SEC tournaments. The Lady Gamecocks have been two Final Fours with Staley as the coach, and she’s been recognized at the SEC Coach of the Year three times and was the 2014 Basketball Times Coach of the Year in 2014.

Off the court, her teams have thrived in the classroom and served in the community. Staley noted that her team’s service efforts are rooted in her players’ deep commitment to helping others. She acknowledged that their community contributions are developed around the desire to offer hope to those who may think that their outlook and future are bleak. As for academics, every student-athlete who completed her eligibility on the team has graduated or is on track for graduation. With Staley’s emphasis on academic achievement, her teams have consistently had a team grade point average above a 3.0.

As a coach, Staley is a consistent supporter and advocate for her team, even when they experience setbacks. When the team missed a repeat victory in the 2018 women’s basketball tournament, Staley said, “Our team performed all year long under adversity; [I] couldn’t be more proud of our players and the way that they have handled themselves ….”

Among the many notable things about Staley is that she is only the second African-American to coach the championship team in the NCAA women’s basketball tournament.

After USC’s win in 2017, Staley lobbied for her colleagues for more diversity and opportunities in intercollegiate athletics. In discussing her advocacy for more diversity in coaching, she said, “I think any time you’re in this profession as an African-American woman…you have to be successful out the gate. If you’re not successful, you have to go back, and fortunately for me, I didn’t go through the ranks of being a grad assistant and assistant coach [to get] there. I was given an opportunity because somebody saw something in me…I hope my success is a beacon of hope for other black coaches.”

Dawn Staley is a graduate of the University of Virginia where she was a point guard and played for Coach Debbie Ryan. She is a three-time Olympic gold medalist, and in 2004, she was elected by her fellow athletes to carry the United States flag at the opening ceremony. She was elected to the Naismith Memorial Basketball Hall of Fame in 2013. Coach Staley, an initiate of the University of South Carolina — Columbia Circle, is the 2018 recipient of the Omicron Delta Kappa Foundation’s Pillars of Leadership Award in Athletics.