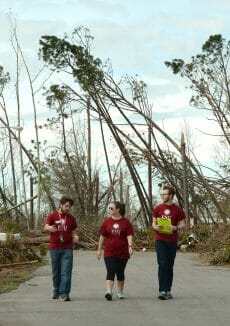 Early October of last year, students at Florida State University Panama City had no idea that some of them would be finishing the semester in Tallahassee. On October 7, 2019, Hurricane Michael formed as a tropical depression near the Caribbean Sea. At that point, the storm’s trajectory and strength posed no significant threat to the FSUPC community. However, that quickly changed. Michael rapidly moved into the Gulf of Mexico, strengthening as it approached the Florida Panhandle. On October 10, Michael made landfall as a Category 5 hurricane and ultimately decimated the Florida Panhandle.

According to FSUPC Associate Dean of Faculty Development and Administrative Affairs Irvin Clark (Radford University, 2017), the community had little time to make preparations and evacuate due to a miscalculation of the hurricane’s speed. By the time authorities ordered a mass evacuation of the Panama City area, it was too late. For those who did try to leave the city, the streets quickly became gridlocked with traffic. Those who stayed feared for their lives as they watched their homes crumble around them. The next few days were filled with devastation and disbelief for the FSUPC community. Students and faculty members alike lost their homes, and many lost all of their possessions. Others were unsure of how they would finish the semester or if it was even possible. The FSUPC campus itself sustained more than $10 million in damages, most of it due to leaking roofs and fallen trees.

The campus stayed closed for two and a half weeks while the community made its first steps toward recovery. When the university reopened, the semester did not pick up where it left off. A percentage of students and faculty did not return. Courses were shifted from on campus to online as many students and faculty were not able to return after the hurricane. Fortunately, the university’s relationship with FSU Tallahassee provided a level of relief for the community. FSU Tallahassee hosted 90% of FSUPC’s first-year students and provided accommodations to those individuals at no cost. The students who were not relocated to Tallahassee moved into FEMA trailers. Though FEMA usually has a limit as to how long one can occupy a trailer, the organization made an exception for the FSUPC students. As of June 2019, some students were still living in FEMA trailers. 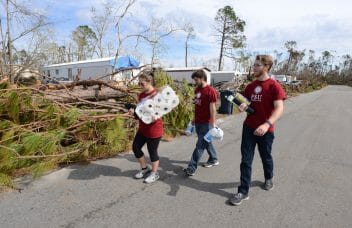 Temporary housing accommodations are not the only lasting effect of Michael. For some individuals, insurance companies have been a constant source of frustration. According to Clark, there is a premium on everything. Many students and faculty members feel the financial pressures mounting. Some students have had no option but to withdraw for the 2019-20 academic year. Post-Traumatic Stress Disorder (PTSD) is another common effect of Michael that is still quite evident throughout the campus community. To address this surge in PTSD-related health concerns, the university has increased its number of on-site mental health counselors and brought in social workers from Tallahassee.

Although the university provided the campus community with ample resources, students also saw an opportunity to take a leadership role in recovery efforts. Students organized and led two programs, Operation Seminole Drive and Operation BBQ Relief. When asked about Operation Seminole Drive, Clark recalled, “Students hit the pavement. They went door to door helping people out.” Meanwhile, Operation BBQ Relief focused on serving free meals to the community. Other campus-wide recovery efforts included food distribution, clothing drives, and supplying temporary housing. Clark also noted how the students used their network to ensure that the broader community’s needs were being met. For example, those with homes not ravaged by Michael opened their doors to other individuals left home- less by the hurricane.

Clark describes the recovery process as a “moving target” that calls for situational leadership. The needs of individuals within the community ranged from requiring assistance with fence repair to medical matters. Since Michael caused serious damage to the local hospitals and led to the closure of many local businesses, it was up to the community to provide the various services needed. Consequently, according to Clark, the most effective leadership style required a personalized approach to aid each individual within the community. In other words, the best leader was a person who could tap into his or her network and connect a person in need with a person who could help. 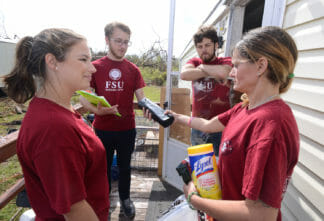 Some of the most significant leaders in the community post-Michael were students. Justine Powell (Florida State University Panama City, 2019) and Antonio Lopez (Florida State University Panama City, 2019) lost everything in the hurricane, including their homes. However, Clark said, “they didn’t just wallow in it. They went out to campus, trying to do what they can do to help other people. They didn’t allow their situation to stop them from wanting to serve.” Both Justine and Antonio were later initiated into Omicron Delta Kappa during the Panama City Circle’s installation ceremony this past spring. The chartering had initially been scheduled for the fall semester, but it was delayed because of Michael. Clark serves as the circle coordinator for the FSUPC Circle of Omicron Delta Kappa.

For others who will need to be leaders in similar times of campus and community crisis, Clark recommends erring on the side of caution. “Have emergency plans in place. Have measures in place where you have a way to account for all of your faculty, staff, and students,” he said. As a part of his better safe than sorry philosophy, Clark strongly advocates evacuating early. “If you absolutely must stay, have rations,” he advised. Adequate food and water supplies along with items like generators were imperative for those who did not evacuate Panama City, which lost power for ten days and water for four days. Above all, Clark urges future crisis leaders to remember that while buildings can be repaired and possessions can be restored, people cannot be replaced.