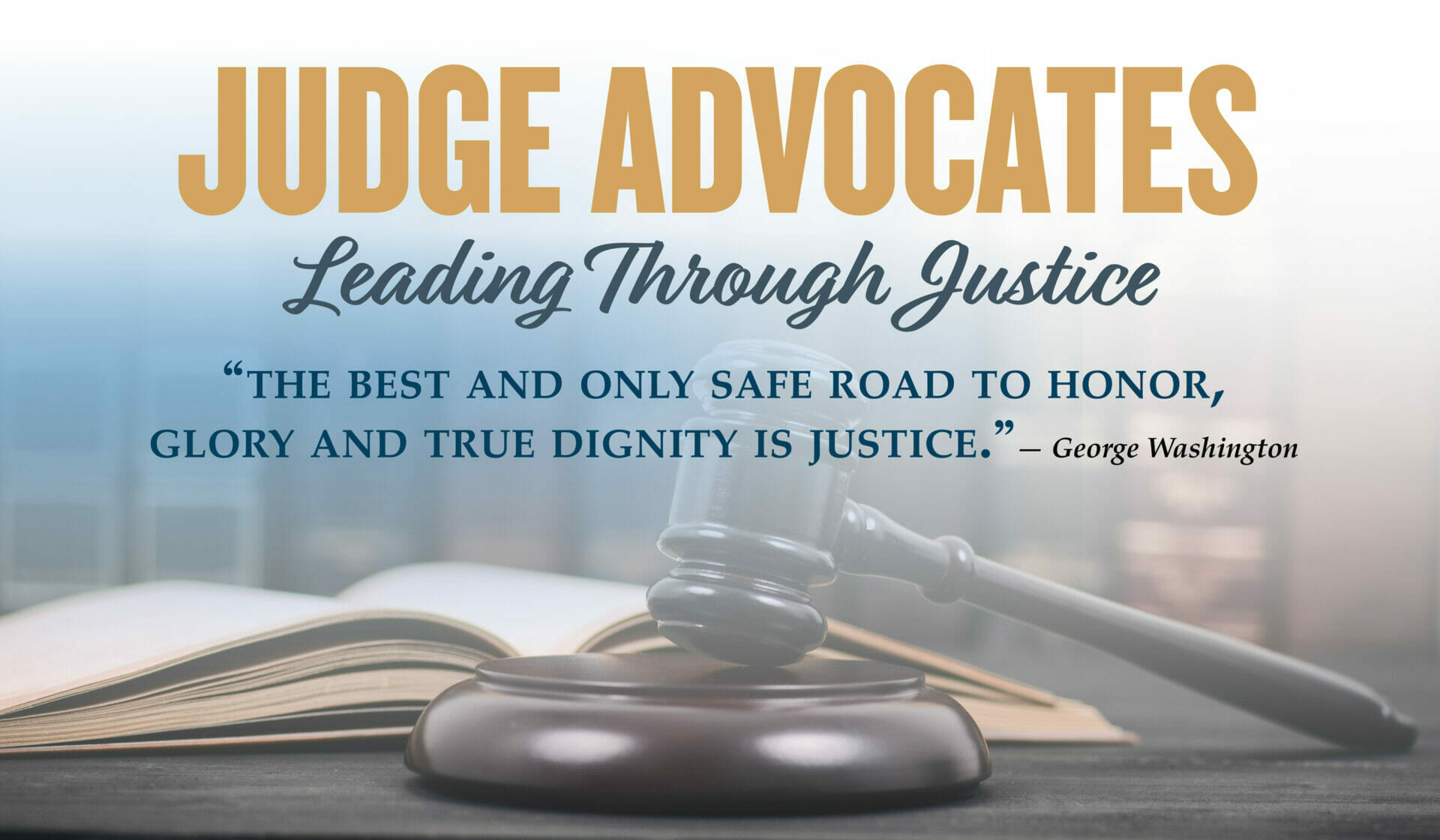 by Amy A. Newman

“The best and only safe road to honor, glory and true dignity is justice.”

A few days after becoming commander-in-chief of the Continental Army in 1775, General George Washington saw a need for a lawyer to oversee the administration of military justice and thus ushered in a new organization of lawyers, legal administrators, and paralegals dedicated to seeking justice within the military. That organization became known as the Judge Advocate General’s Corps, better known as the JAG Corps. The JAG Corps is one of the oldest and largest law firms in the United States of America and is composed of dedicated attorneys serving as officers in all branches of the military who provide legal counsel to military personnel. They also represent the United States in civil cases. Omicron Delta Kappa is proud to profile just a few of our members who have served as judge advocates in the JAG Corps.

Col. Wayne E. Dillingham (Ret.) (Auburn University, 1975) attended Auburn University, graduating with honors in 1975. He then served five years as an officer in the U.S. Marine Corps, flying as a bombardier/navigator in the A-6 Intruder. Subsequently, Dillingham graduated with honors from the University of Tennessee College of Law in 1983 and practiced for two years in a private law firm before returning to active duty as a U.S. Air Force JAG. Dillingham retired from military service with the rank of colonel. In his post-military career, he was an FBI attorney who focused on counterterrorism in the Bureau’s National Security Law Branch before being employed by Middle Tennessee State University in academic outreach.

According to Dillingham, a JAG must be prepared for many professional and personal sacrifices. Some serve in combat zones or other hazardous environments, and many are away from home and family for extended periods, missing holidays and important family milestones. However, Dillingham observes that JAGs should never shrink from their duties because of these sacrifices but be thankful for the opportunity and work given. He notes that a JAG leader’s list of responsibilities is extensive. Among them are being responsible for a staff, including junior attorneys, noncommissioned officers, enlisted personnel, and civilian employees, which may include foreign nationals of the host country when overseas. Ensuring the best possible work environment and helping others achieve their goals is vital, something Dillingham refers to as being a “servant-leader” – putting others ahead of self. He notes that the critical leadership trait for a JAG is integrity and said, “Once it is discovered that a leader lacks it, effective leadership becomes seriously degraded if not outright impossible.”

Dillingham identified other essential leadership traits, including leading by example and embracing all leadership opportunities, even non-JAG assignments and duties. One non-JAG duty Dillingham embraced was attending the Army’s Jumpmaster School so he could better support the Special Operations Forces (SOF) to which he was assigned. “SOF are much more inclined to listen to a JAG’s advice after seeing that JAG perform as a jumpmaster and then jump with them.” The bottom line, as Dillingham states, “Seek every leadership experience possible – JAG or otherwise.”

Birmingham, Alabama, native Capt. Amy Quick Glenos (University of Alabama at Birmingham, 1995) comes from a family with a long tradition of military service. Her grandfathers fought in World War II, and her father retired as a major general from the Alabama National Guard. Glenos has a brother who is currently serving as an infantry officer with duties as a platoon leader and acting XO of his battalion, and her older brother also served as an infantryman and chaplain’s assistant. She explains that she wanted to continue her family’s legacy to serve a greater purpose by joining the military, and her career path led her to the JAG Corps.

Glenos began her career journey after graduating cum laude from the University of Alabama at Birmingham (UAB). While at UAB, she competed on a full athletic scholarship on the school’s NCAA Division I women’s tennis team. Glenos then continued her education at the Cumberland School of Law at Samford University, where she received her Juris Doctorate. She also served as the associate editor of the Cumberland Law Review. Glenos’ time in the JAG Corps began in 2016 when she was directly commissioned. She then attended basic training at Fort Benning, Georgia, and the Officer Advanced Course at The Judge Advocate General’s Legal Center and School in Charlottesville, Virginia.

Currently, Glenos is a reservist with the Alabama National Guard and is practicing labor and employment law with Ogletree, Deakins, Nash, Smoak & Stewart PC, a civilian law firm. When asked how her time in the JAG Corps has benefited her civilian career, Glenos stated that her military experience has been valuable to her civilian practice professionally and personally. Her fellow JAGs include state and federal judges and accomplished civil litigators who “know their way around the courtroom and have taught a lot about big picture trial strategy.” One skill she found personally constructive is the idea of “military bearing,” which teaches soldiers to maintain integrity and professionalism no matter how intense the fight. In 2017, Glenos received the German military’s Mountain Infantry Badge, which required rappelling and mountain climbing. She credits the training she received while in the military with giving her the confidence to take on increasingly challenging assignments.

Authentic Leadership Lies in Being BOLD

Lt. Cmdr. Joanna M. Gonzales (Creighton University, 2007) obtained a Bachelor of Arts at Creighton University and a Juris Doctorate from Loyola New Orleans College of Law. Today, she is a member of the Navy JAG Corps, specializing in military justice, legal assistance, maritime, cyber, and intelligence law. Gonzales’ time in the JAG Corps has taken her overseas to Japan and South Korea. She noted how grateful she was to have been exposed to the unique history, culture, and food in these countries. Gonzales also recognizes the wonderful people she worked closely beside. She describes how important being involved in her community, commitment to service for others, and seeking out educational and mentorship opportunities were to her.

Gonzales does not have set plans for her career, which has allowed her to remain flexible and happy with her assignments. For now, she intends to stay in the JAG Corps, where her experience has allowed her unique insights into the culture, work environment, and specialties of Navy personnel – qualities that she says are unique to military attorneys. If she were to transition to the civilian sector, Gonzales says she would continue in the Navy Reserves and practice law supporting the Department of Defense. Regardless of her career path, Gonzales says, “good leaders will adapt to those they lead” and that authentic leadership “lies in being bold.”

The above observations are the personal view of Joanna Gonzales and

not that of the U.S. Navy or Navy JAG Corps.

Exercise Leadership at ALL Levels 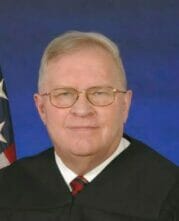 Col. Scott W. Stucky (Ret.) (Wichita State University, 1971) served as an Air Force JAG from 1973-78 and in the Reserve from 1982-2003. He continued his legal career by working as legislative counsel and principal legislative counsel to the Department of the Air Force from 1983-96. From 1996-2006, he served as general counsel and minority counsel to the Senate Committee on Armed Services. Stucky was appointed to the United States Court of Appeals for the Armed Forces by President George W. Bush and served for 15 years.

Stucky’s higher education studies started at Wichita State University (WSU), where he received a Bachelor of Arts with a major in history. He described his collegiate persona as a medievalist focusing on 12th–century through 17th–century European history. At WSU, he began his time in the military when he received a commission as a second lieutenant in the U.S. Air Force through ROTC. Stucky then earned his Juris Doctor from Harvard Law School and obtained a master’s degree in international law at George Washington University. In addition, Stucky holds a master’s degree in history from Trinity University and a diploma from the National War College.

As a JAG, Stucky’s first assignment was in Texas. His second JAG assignment sent him to Thailand, where he did work in international law, offering legal assistance in foreign criminal jurisdictions, primarily dealing with U.S. military personnel and local police issues. Stucky says that if one goes to law school and wants a substantial amount of interesting work early, then the military is hard to beat. While he says civilian law can pay well, it can also be “uproariously dull.” However, Stucky says that the armed forces provide enormous opportunities to exercise leadership at all levels as the military is built around leadership. His advice for future leaders is, “Success is built upon first being a follower, then as a leader. Work hard and ask for responsibility if you can handle it.”

O∆K is proud to have members who served or are currently serving in the military as judge advocates, paving the road to justice by upholding the same principles of “honor, glory and true dignity” that George Washington spoke.

Amy A. Newman is currently serving O∆K as a communications assistant and graphic designer.