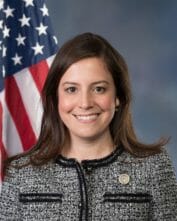 Congresswoman Elise Stefanik, an honoris causa initiate of the SUNY Plattsburgh Circle of Omicron Delta Kappa, is the youngest woman ever elected to Congress in United States history. In 2013, Stefanik declared her candidacy for the House of Representatives, running on a platform of new ideas, new leadership, lower taxes, support for small businesses, and energy. She represents New York’s 21st District in the House of Representatives and is currently in her second term.

Running for Congress was something of an adventure. Stefanik put more than 100,000 miles on her family’s truck, a Ford F-150, visiting with businesses, local officials, and residents while running for office for the first time. Since then, she has been appointed to notable congressional committees and introduced important legislation. Stefanik is a member of the Armed Services Committee, the Committee on Education and the Workforce, and the House Permanent Select Committee on Intelligence.

“I ran for Congress in 2014,” Stefanik says, “because I believe our country needed and still needs a new generation of leadership. Our generation – the millennial generation – is now the largest generation in the workforce and will soon be a plurality of voters in the country. It’s critical that we step up to have a seat at the table for the major discussions going on in our country – from national defense to the economy to healthcare. It also was critically important to me that our region in northern New York is considered a place where young families and entrepreneurs can thrive.”

Stefanik grew up in New York where her parents own a plywood business near Albany. Reflecting on her upbringing, she says, “I admire my mother and my father as leaders. They have built a successful small business and have always, always been encouraging of my aspirations. Whether it was working hard to apply to Harvard, or running for Congress, I have been blessed with encouragement from my parents who have never once insinuated that those dreams might have been too big. Instead, they said ‘Why not?! Of course you can do it!’”

She graduated from Harvard University with a Bachelor of Arts in government. Stefanik was the first person in her family to graduate from college. While at Harvard, she worked closely with Ted Sorensen, President John F. Kennedy’s famed speechwriter, and she earned the Women’s Leadership Award. After college, she joined George W. Bush’s administration as a staff member on the Domestic Policy Council, and she later served in the White House Chief of Staff’s office. She later joined Minnesota governor Tim Pawlenty’s staff as policy director.

Before running for Congress, Stefanik was on Rep. Paul Ryan’s (R-Wisc.) debate preparation team when he ran for vice president. She then briefly returned to New York following the November 2012 elections.

As the youngest woman ever elected to Congress and one of less than 90 female representatives, Stefanik received some early criticism. She shares, “Unfortunately, there are unique challenges that young women candidates and elected officials face. For example, I have been called ‘little girl,’ ‘a gofer,’ ‘a child,’ and my work experience has been denigrated as not having worked ‘with my hands.’ These comments are not representative of the vast majority of respectful and encouraging people that I have met over the course of running for and serving in Congress. The best way to combat these challenges is to lead by example and deliver results. I am proud to have significant constituent services and legislative results that I’ve been able to deliver back home to the hardworking families I represent.”

One of her largest constituent groups includes soldiers and members of the military. Fort Drum, a U.S. Army military reservation, is based in her district. Fort Drum plans and supports the mobilization and training of almost 80,000 troops annually. As such, Stefanik is highly involved in the Armed Services Committee as well as legislation affecting soldiers and the military.

“As the proud home of Fort Drum and the Navy Nuclear Site at Kesselring,” Stefanik says, “my district is home to countless military families who make enormous sacrifices on behalf of our nation. In Congress, I’ve been pleased to have two bills signed into law to ease the burdens our military families face when having to move due to their service members’ change of station.

“This is great news for our district, but we must continue working in support of our servicemen, women, and their spouses. In my conversations with military families, one common concern is the impact that relocation and changes of station have on military spouses searching for employment. Because of the burdens created by constant relocation, researchers estimate that up to 25 percent of military spouses are unemployed; an additional 25 percent are underemployed or working underpaying jobs that don’t utilize their skill set or education.”

“In February, Congressman Donald McEachin (D-Va.) and I introduced the Military Spouse Employment Act to address this frustrating issue that has impacted military families for too long. Military spouses serve, too, and it’s critical we work together to ensure our country’s military spouses have the jobs they need and deserve.”

Stefanik has also taken up the health care challenge. She explains, “Our district is a very rural district that has many unique healthcare needs and challenges. I was pleased to lead the fight to reauthorize Community Health Center funding because these important centers provide medical services to over 95,000 patients in my district. These centers provide services that are not always covered by Medicare, Medicaid, and private insurance, including cancer screenings, preventive care, mental health and substance abuse services, transportation, and in-home visits.

“When their funding was at risk of lapsing, I wrote legislation to reauthorize it that garnered over 200 co-sponsors and helped push this issue into the forefront of debate in Congress. I was pleased to see a two-year extension of this funding signed into law this February due to our efforts.”

Of the 435 members of the House of Representatives, Stefanik ranks 31st as the most bipartisan member according to the index created by The Lugar Center and the McCourt School of Public Policy. She recently told North Country Public Radio that many “media outlets, particularly network news, focus on the controversies and whatever’s loudest at the time. What’s missed is that eighty percent of the bills we’ve passed have been bipartisan.” Still, it’s hard to ignore the fighting in Washington.

When asked how Congress can do a better job of collaborating, Stefanik responded, “I believe this is a generational issue. We should look to the younger members on both sides of the aisle as examples of focusing on bipartisanship. Younger members like Will Hurd (R-Texas), Carlos Curbelo (R-Fla.), Seth Moulton (D-Mass.), and Derek Kilmer (D-Wash.) are leading the way in Congress by focusing on results for their constituents instead of partisan fights.”

How does Stefanik balance both sides of a contentious debate? She noted that there has been much discussion about Second Amendment rights, school safety, and gun control in Washington since the shooting at Marjory Stoneman Douglas High School in Parkland, Florida. However, she stressed the importance of bipartisanship in these conversations.

She says, “I am a strong supporter of Second Amendment rights and will continue to work with my colleagues in Congress on bipartisan solutions to help end these tragic incidents of gun violence in schools. I have previously cosponsored legislation to ban bump stocks, voted to strengthen the National Instant Criminal Background Check System and helped pass legislation that was signed into law to reform our federal mental health system. I have also cosponsored legislation to specifically address school violence and recently helped the House pass the STOP School Violence Act – legislation I cosponsored to provide grant funding for evidence-based training to prevent school violence. I will continue to work in a bipartisan fashion to end gun violence in our schools and keep our children safe.”

Her balanced approach to politics and strong leadership has paid off. Stefanik won re-election in 2016 by more than 30 points. Stefanik will face a Democratic challenger and a Green Party candidate in the fall.

Regardless of politics, one can appreciate Stefanik’s view on leadership. She says, “You have two ears and one mouth. Use them in that ratio. I was given this advice early as a candidate, which highlights the importance of listening. This advice has proven helpful while in office because many of my best legislative ideas come directly from constituents who come to my office with concerns or challenges working in government, and we work to solve them.”

On advice that Stefanik would give to current students, she says, “I learned many leadership skills as a student leader in high school and on my college campus. In high school, I served on Student Council and was elected President my senior year. In college, I served as a leader on the Student Advisory Committee at Harvard’s Institute of Politics – the largest political organization on campus. I learned the importance of bringing together different perspectives and political beliefs and how to be respectful and civil as we discussed issues we are passionate about.”

Based on Stefanik’s desire to listen to her constituents, find balanced solutions, and dedicate herself fully to creating change, we expect to see more of Elise Stefanik in years to come.