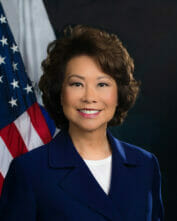 Elaine L. Chao served the United States as the 24th Secretary of Labor from 2001-09 and the 18th Secretary of Transportation from 2017-21. Born in Taipei, Chao was the first Asian-American woman and the first Taiwanese American to be appointed to the President’s Cabinet. Earlier in her career, she worked for several financial institutions before working in the Department of Transportation under Presidents Ronald Reagan and George H.W. Bush (Harding University, 1997). In addition, Chao was the president of the United Way of America from 1993-96.

Chao’s family eventually moved to Long Island, New York. She graduated from Mount Holyoke College with her Bachelor of Arts degree and earned her MBA from the Harvard Business School. She has served the Society as a member of the Foundation Board of Trustees. Chao is a 2000 recipient of the Eldridge W. Roark, Jr. Meritorious Service Award. 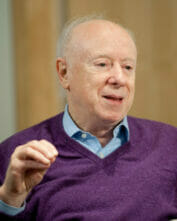 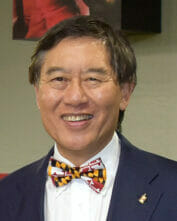 Loh was born in Shanghai, and with his family, he moved to Lima, Peru, after the Communist Revolution in 1949. He first came to the U.S. to attend college at Grinnell. Loh went on to earn a master’s from Cornell, a doctorate in psychology from Michigan, and a law degree from Yale. Loh is a Fellow of the American Academy of Arts and Sciences. He has served on the board for the American Council of Education. Loh was also the recipient of the American Immigration Council’s 16th Annual Immigrant Achievement Award. 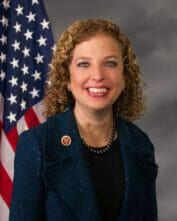 Deborah “Debbie” Wasserman Schultz is the current congresswoman representing Florida’s 23rd congressional district. She was first elected to the House of Representatives in 2004 and is the first female Jewish representative from Florida. Before her time in Congress, Wasserman Schultz was a member of the Florida State legislature. She has served as the chair of the Democratic National Party. In the 117th Congress, she is serving on the House Committee on Appropriations and the House Committee on Oversight and Reform.

Wasserman Schultz earned her Bachelor of Arts and Master of Arts, both in political science, from the University of Florida. As a student, she served as president of the Student Senate and was involved in residence life. Wasserman Schultz was also the president of the Graduate Student Council. She remains active with the National Jewish Democratic Council and is a breast cancer survivor and advocate.